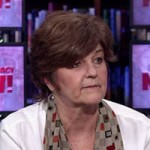 As Republicans attempt to revive a bill to overturn Obamacare, today’s show considers the radical right’s attempt to reshape the role of the federal government—from healthcare to education to housing. Discussing this is Duke University historian Nancy MacLean, author of the new book, “Democracy in Chains: The Deep History of the Radical Right’s Stealth Plan for America.”

Republicans Have Trifecta Control of 25 States & Need 6 More to Call for a Constitutional Convention
Historian Nancy MacLean says much of the radical right’s agenda is being pursued at the state level. Republicans already have “trifecta control” in 25 states—control of the governor’s seat and both chambers of their legislative bodies—compared to six states for Democrats. “The ultimate Big Bang of this project is that they want to change our Constitution,” Maclean says. “They are actually building towards a constitutional convention. So they have 28 states that have called for this constitutional convention. They need six more.”

Trump Picks DAPL Lobbyist to Oversee EPA Water Safety in Same Week He Rolls Back Water Safeguards
As Donald Trump announced this week that the Environmental Protection Agency will roll back an Obama policy that environmentalists say safeguards drinking water for one in three Americans, The Intercept reports that the person Trump has tapped to be the EPA’s water safety official is a former lobbyist with deep ties to a fossil fuel advocacy group that promotes the Dakota Access pipeline and offshore drilling.