Movements by the Taurus Moon today could feel a little provocative as it opposes Mars, Jupiter and Vesta in Scorpio. This might be especially true if your sense of freedom (particularly sexual or financial freedom) feels challenged in a relationship.

“The voice of God, if you must know, is Aretha Franklin’s.”
— Marianne Faithfull

The Year that Was
Dear Friend and Reader:

It’s time to sign off from 2017, a memorable year if ever there was one.

Let’s see, the women’s march on Washington was in January; there were the hurricanes, after which people are still sitting in the dark; the California fires from which people are still evacuating; the trillion-and-a-half-dollar-plus tax cuts for billionaires, added to the federal debt; the killing of internet neutrality rules; and a hundred top entertainers, politicians, reporters and business executives being revealed as sexual harassers or rapists. 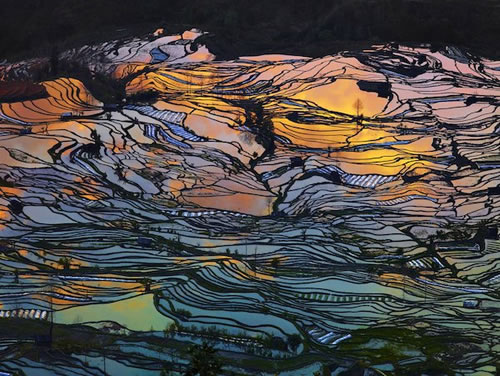 There were the extremely strange, still unexplained mass shootings one night in Las Vegas; one Muslim travel ban after the next; the firing of the FBI director, and the president’s accusation that the Trump-appointed Justice Department is somehow Trump’s enemy; the indictment of four Trump campaign officials; North Korea making good on its nuclear ambitions; Russians still infiltrating the U.S. election apparatus; executive rule by Tweet Fiat; and so on.

Even by contemporary standards, this is an unusual litany of events, and it’s all surfing in the wake of the sheer madness of 2016 — the year of emotional asphyxiation, of gas-lit political nightmares, and getting used to what we didn’t know would be the new normal. Yet nobody is really asking how this is possible, nor how it’s possible that so many people think this is all good: that the president’s actions constitute actual, beneficial leadership.

The majority of people don’t think so, but somehow we now find ourselves in a minority-rules situation. The mysterious 35% of people who will support these policies no matter what, are now, evidently, the most important constituents in our land. We are gradually convincing ourselves, or being convinced, that it’s their country and not ours. Yes, those folks who believe that Armageddon is imminent, so we may as well bring it on.

If Your Birthday is Dec. 29
(The Day of Preeminence) | Capricorn Birthday Reading | All Other Signs
Always remember that you’re born under an earth sign, which means you appreciate the earthy things in life. Or, said another way, what you want the most is what’s natural, handmade, homemade, and appeals to the cozy critter in you. Embrace this aspect of yourself and you’ll discover you feel better, you’re happier and your relationships are more fun.

Written in the Planets
Movements by the Taurus Moon today could feel a little provocative as it opposes Mars, Jupiter and Vesta in Scorpio. This might be especially true if your sense of freedom (particularly sexual or financial freedom) feels challenged in a relationship. The Moon’s trine to Pluto may assist you in getting beneath the surface of these feelings, and that in turn could actually help you to become closer to a partner. Clear, judicious communication with an eye toward the future and a heartfelt sense of purpose should help.