Have you been so busy blazing forth that some facet of devotion to your self-care and expansion of consciousness has been sacrificed? How about the ways in which you care for family (whether biological or family of choice)? Devotion and sacrifice are concepts that have gotten distorted in modern life (indeed, over the ages).

“There are many degrees of Probable, some nearer Truth than others, in the determining of which lies the chief exercise of our Judgment.”
— Christiaan Huygens

With Mercury stationing retrograde, a Full Moon passing through town and Venus getting ready to station direct, it’s been a rough week in the public sphere. 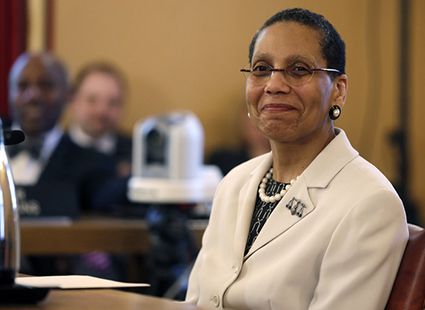 Judge Sheila Abdus-Salaam in 2013. She was the first black woman to serve on New York State’s highest court. She was found floating in the Hudson River Wednesday. Photo by Mike Groll.

Let’s see: there was Sean Spicer, Trump’s spokesman, claiming — during Passover — that Hitler didn’t use chemical weapons. Then he bungled his various “apologies,” at one point calling the concentration camps “Holocaust centers.”

He added that he did not want his comments on Hitler to distract from Trump’s attempts “to destabilize the region.” Hey, at least this shows he’s capable of telling the truth.

United Airlines dragged one of its bumped passengers screaming from an overbooked plane, because he was picked by a computer to give up his seat and refused to do so, explaining that he was a doctor who had to get back to see his patients.

The first Muslim and African American woman judge on New York State’s highest court was found Wednesday floating in the Hudson River. Police are saying there’s no evidence of a crime. The chart suggests we may never know the cause of death. The New York Times is now reporting that it was suicide.

If Your Birthday is April 14
(The Day of Tradition) | Aries Birthday Reading | All Other Signs
Looks like it’s time for you to wage an inner revolution. This is not a revolution of pitchforks and torches, however. It’s one of daring to rebel against the constant onslaught of external stimulation and distraction — at least, long enough to establish a palpable sense of inner space. Once you begin to feel it, you can foster and nourish it consciously. This is psychological; it’s spiritual; and it’s capable of setting you free to be more “you” than you’ve ever been before.

Written in the Planets
Have you been so busy blazing forth that some facet of devotion to your self-care and expansion of consciousness has been sacrificed? How about the ways in which you care for family (whether biological or family of choice)? Devotion and sacrifice are concepts that have gotten distorted in modern life (indeed, over the ages). Or is it that humanity was confused about this from the beginning, and only now are we starting to sort things out? In any case, just as the Sun conjoins Uranus in Aries today, it also exactly squares Vesta in Cancer. As you initiate your own inner revolution, notice which “sacrifices” don’t really feel like any kind of loss — and how natural devotion can be when you’re acting on what you know is true at your core.