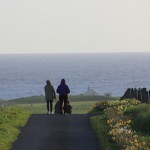 Tonight is the Cancer New Moon, exact at 10:48 pm EDT (02:48 UTC Friday). But it’s not just a New Moon: it is also a partial solar eclipse. Not only that, it’s an eclipse opposite Pluto in Capricorn. Amanda Painter explores some of the themes for tonight’s eclipse chart, which begins a three-eclipse month.

Tonight is the Cancer New Moon, exact at 10:48 pm EDT (02:48 UTC Friday). But it’s not just a New Moon: it is also a partial solar eclipse. Not only that, it’s an eclipse opposite Pluto in Capricorn. 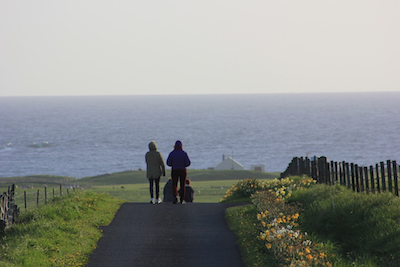 It might look like they’re about to step off the edge, but they’re not. Photo by Amanda Painter.

Perhaps the most striking story I’ve seen in the news this week that illustrates this setup is the rescue of the 12 Thai student soccer players and their coach from the Tham Luang cave. Even though the rescue was completed on Tuesday, I’d say it’s still in the zone.

Pluto (lord of the underworld) in Capricorn (mountains) is absolutely subterranean. A New Moon is the darkest part of the lunar phase, yet it’s also the turning point when a new cycle begins. Cancer, of course, is a water sign — and the one most associated with taking care of others. It’s also worth noting that Jupiter stationed direct in Scorpio on Tuesday: an image of the trapped (or ‘fixed’) water that had closed off the cave deep under the surface, and the good fortune involved in being able to emerge from it.

Yet it’s Pluto’s associations with death, fear, and profound, soul-level change that really bring it all home. Think for a moment about the inherent metaphor: 13 people were ‘entombed’ while alive underground. They were brought back to the surface, but they will forever be changed in some way (likely in many ways) as a result of this experience. They can no longer be exactly who they were before — yet they still are who they are, and they are alive.

Change is not death; the cave was not death for the soccer team (though it easily could have been; and in fact it was for one member of the rescue team, a 38-year-old retired Thai Navy SEAL). I mention this because it is so easy to get caught up in the fear of change. Our egos can interpret any change, even positive change we’ve always dreamed of, as a threat; the ancient reptilian part of our brain senses the stress involved in anything exciting, uncertain or ‘dangerous’ and swoops in to keep us ‘safe’ from ourselves.

Transition and growth are not the same as death, no matter how scary they seem. Transition and growth are actually the opposite: they are life. They are what give our lives meaning and allow us to discover and pursue a sense of purpose. And as Eric mentioned in the Monday Astrology Diary, “nothing quite says ‘meaningful’ like an eclipse opposite Pluto.” It’s an encounter with our humanity via the most basic building blocks of existence: fear, sex, death, change, desire, growth, shadow and light.

Tonight’s Cancer New Moon and partial solar eclipse is not an event to be lived solely online; it’s not about our technology, or ‘communication’, or some filtered, enhanced, staged idea of who you are. This is internal and personal, and the chart as a whole offers a couple of reminders of what makes you human.

The first is a grand trine in the earth signs, comprising Uranus and Juno in Taurus, Venus and Ceres in Virgo, and Saturn in Capricorn. One reading of this is that there’s some physical stability and grounding amidst whatever events or changes the eclipse heralds, as well as the potential to bring something into the material/tangible plane.

The second reminder is a slightly looser grand water trine, involving the Sun and Moon in Cancer, Jupiter in Scorpio, and Neptune in Pisces. You could say this offers some emotional buoyancy to keep the planets in earth signs from feeling too heavy, including Pluto; and in so doing supports the flow of needed changes.

Yet the grand trines in earth and water signs are also a reminder of your literal body and your emotions: two of the key, inimitable things that separate you from robots and Artificial Intelligence. Your physical body and your emotions — in concert with your mind and that ineffable factor/process called ‘spirit’ or ‘soul’ — together make you more than the sum of your parts.

I’m not sure why it becomes so easy for so many people to forget this, to lose sight of the wholeness of a human being and then treat people as disposable objects — or worse. I suspect a good number of people reading this even treat their material possessions better than the way that U.S. immigration officials and the Trump administration (and many other people in many other parts of the world, for millennia) treat the human beings under their power.

Speaking of which: on Wednesday news broke that, faced with dueling requirements to release children from detention after 20 days and also to keep them with their parents or other adult relatives, federal officials said hundreds of migrant families being detained on the U.S. border will be released wearing ankle monitors. It’s not enough, and will not undo the psychological harm already done, but it’s better than holding children in cages separate from their parents.

Goddess willing, more developments in a more humane direction will unfold for the traumatized asylum-seekers and their children in this country, and elsewhere. If, like me, you had to briefly step back from actions calling for immediate relief, release and reunification, these eclipse weeks may be a good time to get involved again. Trump’s announcement of a Supreme Court justice nominee also bears following this month, and is another reason to make calls to your senator.

Note that I said “this month,” not “the next two weeks.” The ‘Eclipse Zone’ is usually two weeks long, bookended by a pair of eclipses — one solar, one lunar. Once in a while, however, the Earth, Moon and Sun line up well enough to form three eclipses over a period of four weeks.

You might try focusing on initiating new patterns and setting new intentions with the first and third eclipses, and releasing that which does not align with your desired changes (or does not align with the events you’re called to surrender to) with the middle eclipse. With Mars retrograde in Aquarius the entire time, and Mercury soon to be retrograde in Leo, the shifts might not be as straightforward as you desire, but should still be interesting.

Keep us posted on what transpires for you — whether in a comment below this post or on another post in the coming weeks, on one of the Planet Waves Facebook pages, or via email. Most of all, stay alert for unusual opportunities, synchronicities and connections — and see what Pluto has to show you.

21 thoughts on “Entering the Eclipse Zone with Pluto”