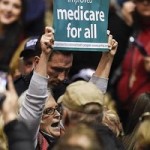 As the Republican healthcare bill collapses, Senate Majority Leader Mitch McConnell says he’ll now try to push through legislation to repeal the Affordable Care Act and wait until after the 2018 midterm elections to propose a replacement.

Dr. Carol Paris: We Must Make It Toxic for Politicians to Not Get on Board with Single Payer
As the Republican healthcare bill collapses, Senate Majority Leader Mitch McConnell says he’ll now try to push through legislation to repeal the Affordable Care Act and wait until after the 2018 midterm elections to propose a replacement. Meanwhile, proponents of a single-payer healthcare plan are organizing to urge Congress not only to stop the effort to repeal Obamacare, but to pass a bill that would guarantee Medicare for all. Guest Dr. Carol Paris, president of Physicians for a National Health Program, was arrested Monday during a protest against the Republican healthcare bill.

Gaza on Verge of Collapse as Israel Sends 2.2M People “Back to Middle Ages” in Electricity Crisis
Israeli-imposed restrictions have limited electricity in Gaza to barely four hours a day, creating a humanitarian catastrophe for its 2 million residents. In 2012, the World Health Organization warned that Gaza would be uninhabitable by 2020. The U.N. now says the area has already become unlivable, with living conditions in Gaza deteriorating faster than expected.

Activist & Father of Four Faces Deportation to Devastated Haiti Because of Decades-Old Conviction
Jean Montrevil came to the U.S. from Haiti with a green card in 1986 at the age of 17, but a mistake he made when he was a teenager could now lead to his deportation. During the height of the crack epidemic, he was convicted of possession of cocaine and sentenced to 11 years in prison. Upon his release, he married a U.S. citizen, had four children and became a successful small businessman, as well as an immigrant rights activist. He has had no further interaction with the criminal justice system. But because of his earlier conviction, Jean is required to check in with immigration officers regularly under a supervision program. Jean joined us in 2010, after he was detained at one of these check-ins and came very close to being deported to Haiti. But when a fellow detainee bound for Haiti had a fever, the illness halted the flight, and then the 2010 earthquake struck. With the country too devastated to deport people to, Jean was released. Since then, he has continued to check in with no further threats of deportation, until last month, when he went to his first check-in under President Trump. Without any advance notice, he was detained, handcuffed and processed to be deported, until calls from his supporters apparently prompted immigration officials to release him. On Thursday, he must check in again, and he’s concerned he will again be detained.

One thought on “Dr. Carol Paris: We Must Make It Toxic for Politicians to Not Get on Board with Single Payer”