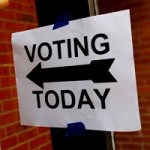 Do Historic Victories & Tight Races in Primaries Mean Dems Could Retake Senate & House in November?
Voters headed to the polls Tuesday for a special election in Ohio and primaries in Michigan, Kansas, Missouri and Washington. A special election in Ohio’s 12th Congressional District remains too close to call, but Republican Troy Balderson has already claimed victory over Democrat Danny O’Connor to serve the remainder of former Republican Congressmember Pat Tiberi’s term. Balderson leads by just 1,754 votes, and thousands of absentee and provisional ballots still need to be counted. O’Connor is hoping to pull off a major upset. President Trump won the district in 2016 by a margin of more than 11 percent. In Michigan, Rashida Tlaib won the Democratic primary for John Conyers’s old House seat. She could now become the first Muslim woman elected to Congress.

Madison, Wisconsin “Shaken” by Shooting at Community Radio Station WORT-FM
It’s been three days since a masked gunman opened fire on a Madison community radio station early Sunday morning, injuring one person. A station DJ who was shot in the buttocks was taken to the hospital and later discharged. No arrests have been made. WORT-FM is a member-controlled community radio station broadcasting to South Central Wisconsin that has been on the air since 1975. The Madison police say they do not believe the attack was motivated by hatred of the media.

Meet Debbie Africa: First MOVE 9 Member to Be Freed in 40 Years & Now Reunited with Her Son, Mike
Today marks the 40th anniversary of a massive police operation in Philadelphia that culminated in the siege of the headquarters of the black radical group known as MOVE. The group was founded by John Africa, and all its members took the surname Africa. It was August 8, 1978, when police tried to remove members of MOVE from their communal home with water cannons and battering rams, even as some continued to hide in the basement with children. During the siege on MOVE’s house, gunfire was exchanged, and a police officer named James Ramp was killed. Two years later, nine MOVE members were convicted of third-degree murder in Ramp’s death. They were sentenced to 30 to 100 years in prison and became the MOVE 9. Debbie Africa was the first of the nine to be released from prison. At the time of Debbie’s arrest, she was 8-and-a-half months pregnant with her son, who was born inside prison. They were reunited on June 16 after nearly four decades separated.

Freed After 40 Years, Debbie Africa Asks: When Will the Rest of the MOVE 9 Members Get Parole?
Exactly 40 years ago today, the Philadelphia police besieged the headquarters of the black radical group known as MOVE. During the siege on MOVE’s house on August 8, 1978, gunfire was exchanged, and a police officer named James Ramp was killed. Two years later, nine MOVE members were convicted of third-degree murder in Ramp’s death and were sentenced to 30 to 100 years in prison. Now, the first of the MOVE 9 has been freed. Debbie Africa spent nearly 40 years behind bars before being released earlier this summer. Newly freed, she has united with her son, Mike Jr., for the first time outside prison walls.