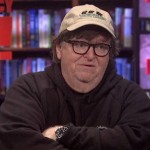 A Senate hearing with Supreme Court justice nominee Brett Kavanaugh and Dr. Christine Blasey Ford may not move forward, as Blasey Ford asks for the FBI to investigate her claims that Kavanaugh attempted to rape her as a teenager before she testifies.

Michael Moore: Senate Must Take Dr. Christine Blasey Ford Seriously & Postpone Kavanaugh Hearing
A Senate hearing with Supreme Court justice nominee Brett Kavanaugh and Dr. Christine Blasey Ford may not move forward, as Blasey Ford asks for the FBI to investigate her claims that Kavanaugh attempted to rape her as a teenager before she testifies. Senate Judiciary Committee Chair Chuck Grassley had invited Blasey Ford and Kavanaugh to both testify on Monday, but Blasey Ford’s attorneys are declining the offer. Her lawyers wrote in a letter to Grassley, “While Dr. Ford’s life was being turned upside down, you and your staff scheduled a public hearing for her to testify at the same table as Judge Kavanaugh in front of two dozen U.S. Senators on national television to relive this traumatic and harrowing incident.” The letter revealed that Blasey Ford has received multiple death threats and has been forced to move out of her home. On Tuesday night, Senator Grassley said there’s “no reason for any further delay” in the hearing, even if Christine Blasey Ford does not testify. Oscar-winning filmmaker Michael Moore speaks about Kavanaugh and Christine Blasey Ford. His new movie, “Fahrenheit 11/9,” is out in theaters this week.

Rev. William Barber: Kavanaugh on the Supreme Court Would Endanger Rights of Women, Workers & Voters
Dr. Christine Blasey Ford’s sexual assault allegations against Brett Kavanaugh have cast doubt on whether President Trump’s Supreme Court nominee will be confirmed by the Senate. “The process was bad from the beginning,” says Rev. Dr. William Barber, co-chair of the Poor People’s Campaign and president of Repairers of the Breach. “We are poised to have two presidents that did not win the popular vote, now will have appointed four extreme members to the Supreme Court.” Barber says Kavanaugh will be dangerous to voting rights, to labor rights, to healthcare and to women’s rights.

Rev. Barber: North Carolina Has Two Storms, Florence & the Policies that Keep People in Poverty
As President Trump visits North Carolina, where thousands are evacuating after Hurricane Florence caused record flooding, we go to Raleigh to speak with Rev. Dr. William Barber, co-chair of the Poor People’s Campaign. Areas devastated by the storm include some of the poorest areas on the Eastern Seaboard. Barber’s recent CNN piece is headlined “In hurricane wind and waves, the poor suffer most.”

“A Matter of Life and Death”: Trump Admin Slashes Refugee Cap to Historic Low, Imperiling Thousands
The Trump administration has once again slashed the number of refugees allowed to resettle in the United States. On Monday, Secretary of State Mike Pompeo announced the new cap on refugees would be a historic low of just 30,000 next year, down from the current level of 45,000. The actual number of refugees allowed in to the country is expected to be even lower than the 30,000 cap. Monday’s announcement represents the lowest ceiling any president has imposed on the U.S. refugee program since its creation in 1980. Under President Obama, the refugee cap reached 110,000. For more on the Trump administration’s refugee policy, Ryan Mace is interviewed, a refugee specialist for Amnesty International USA.