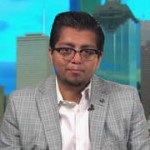 In a major attack on immigrant communities across the United States, Attorney General Jeff Sessions has announced the Trump administration is rescinding the DACA program, which gives nearly 800,000 young immigrants permission to live and work in the United States.

Meet Cesar Espinosa: After Surviving Harvey, He’s Fighting for his Future as Trump Rescinds DACA
In a major attack on immigrant communities across the United States, Attorney General Jeff Sessions has announced the Trump administration is rescinding the DACA program, which gives nearly 800,000 young immigrants permission to live and work in the United States. President Obama implemented DACA in 2012, after nearly a decade of massive grassroots organizing and direct action protests by undocumented youth across the country. Obama called Tuesday’s announcement “wrong,” “self-defeating” and “cruel.” Sessions’s announcement Tuesday morning sparked immediate protests across the country, with crowds taking to the streets in Minneapolis, Chicago, Los Angeles, Atlanta, Washington, D.C., and Houston. In New York City, 34 people were arrested during a sit-in at Trump Tower, led by undocumented activists.

Reclaiming Gotham: Juan González on Cities Leading the Revolt Against Trumpism & Neoliberal Policies
The city of New York announced Tuesday it is deploying funding for legal services for DACA recipients across the city, following the Trump administration’s decision to rescind the DACA program. In a message posted on Twitter, the office of Mayor Bill de Blasio said, “You Are Not Alone… if you face legal problems, we’ll be right there with you.” The fight to save DACA marks just the latest example of cities pushing back against the Trump administration’s agenda. From climate change to sanctuary cities to police accountability to affordable housing, cities are increasingly pushing a far more progressive agenda than their counterparts in Washington. This is a central theme in a new book by Democracy Now! co-host Juan González titled “Reclaiming Gotham: Bill de Blasio and the Movement to End America’s Tale of Two Cities.” For more, we speak with Juan González, longtime staff writer for the New York Daily News, now a professor of journalism and media studies at Rutgers University.