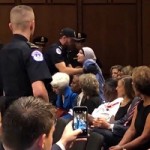 Chaos Greets Kavanaugh Confirmation Hearing as Protesters & Dems Demand Postponement
Protests, arrests and repeated calls from Democratic senators to adjourn the proceedings. That’s how confirmation hearings began Tuesday for Judge Brett Kavanaugh, President Trump’s pick to fill Justice Anthony Kennedy’s seat on the Supreme Court. Heidi Sieck is co-founder of the national organization VoteProChoice, who was the first member of the public to enter the Kavanaugh hearings on Tuesday and was removed after she protested, along with dozens of others who interrupted the proceedings.

Report Finds Judge Kavanaugh Ruled Against Public Interest in Almost All of His District Court Cases
Even as records about Judge Brett Kavanaugh’s time in the White House remain concealed, much can be learned from his judicial record. Robert Weissman, president of Public Citizen, discusses their analysis of Judge Kavanaugh’s opinions in split-decision cases, which found that during his 12 years on the U.S. Court of Appeals for the D.C. Circuit, Kavanaugh decided or wrote an opinion against the public interest 87 percent of the time in split-decision cases dealing with consumer, environmental and worker rights.

As Amazon Hits $1T in Value, Its Warehouse Workers Denounce “Slavery” Conditions
Amazon made headlines Tuesday when it became the second American company, after Apple, to reach $1 trillion in value. Amazon’s founder and chief executive, Jeff Bezos, is the richest man in the world, with a net worth of more than $167 billion. But what’s behind that wealth? What about its workers? The working conditions in Amazon’s warehouses have been the focus of protests, union drives and several investigations—including by student reporters.

Exposed: Undercover Reporter at Amazon Warehouse Found Abusive Conditions & No Bathroom Breaks
Independent Senator Bernie Sanders has targeted Amazon for its role in widening the wage gap in the United States, and this week he is expected to unveil legislation requiring large employers like Amazon to cover the cost of federal assistance received by their employees. Journalist James Bloodworth spent a month working undercover as a “picker” in an Amazon order fulfillment center and found workers were urinating in bottles because they were discouraged from taking bathroom breaks. His new book is “Hired: Six Months Undercover in Low-Wage Britain.”