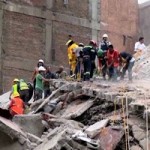 In Mexico, a massive 7.1-magnitude quake struck 100 miles southeast of Mexico City Tuesday, collapsing dozens of buildings around the capital city and trapping schoolchildren, workers and residents beneath the rubble. At least 217 people are dead, and hundreds more are missing.

Hundreds Dead in Mexico After Earthquake Strikes on Anniversary of Devastating 1985 Quake
In Mexico, a massive 7.1-magnitude quake struck 100 miles southeast of Mexico City Tuesday, collapsing dozens of buildings around the capital city and trapping schoolchildren, workers and residents beneath the rubble. At least 217 people are dead, and hundreds more are missing.

Among the dead are least 21 students at a primary school in Mexico City and 15 worshipers who died during a Catholic mass when the earthquake triggered an eruption at a volcano southeast of the city. The disaster struck just hours after residents participated in an earthquake preparedness drill marking the 32nd anniversary of a 1985 earthquake that killed 5,000 people. Tuesday’s quake follows another earthquake less than two weeks ago, which killed at least 90 people and leveled thousands of homes after it struck near the coast of the southern state of Oaxaca.

Hurricane Maria Strikes Puerto Rico, Threatening to Be Most Catastrophic Storm in a Century
On Tuesday, speaking to the United Nations General Assembly, President Trump railed against the Cuban government and said the U.S. would not lift its sanctions against Cuba. Trump has moved to reverse the normalization of relations between the U.S. and Cuba and reimpose travel and trade restrictions. Secretary of State Rex Tillerson also said the U.S. may close the embassy over a host of unexplained health problems that embassy workers are suffering, including hearing loss and brain injury. The health problems appear to be caused by some form of sonic attack. Cuban officials deny any involvement in the apparent sonic attack and are cooperating with U.S. officials to investigate the incidents.

Senate Republicans Scramble to Secure Votes for Last-Ditch Effort to Repeal Affordable Care Act
Vice President Mike Pence and other Trump administration officials spent Tuesday on Capitol Hill lobbying Republican senators to support the latest healthcare plan, known as the Graham-Cassidy bill, named after its main architects, Bill Cassidy of Louisiana and Lindsey Graham of South Carolina. The last-ditch effort by Senate Republicans to repeal and replace the Affordable Care Act has to be done by September 30, when a deadline allowing the Senate to pass the legislation by a simple majority expires. The Center on Budget and Policy Priorities says the bill would cause many millions of people to lose coverage, gut Medicaid, eliminate or weaken protections for people with pre-existing conditions and increase out-of-pocket healthcare costs to individuals, all while showering tax cuts on the wealthiest Americans. The New York Times editorial board wrote on Tuesday, “It is hard to overstate the cruelty of the Graham-Cassidy bill.”

Advocates Warn All Rohingya May Be Driven Out of Burma If Military’s Ethnic Cleansing Continues
A humanitarian crisis continues to unfold in Burma, where more than 400,000 members of the Rohingya Muslim minority have fled the country to escape a brutal Burmese military operation. According to Human Rights Watch, tens of thousands of Rohingya homes have been burned to the ground. Some 214 Rohingya villages in Burma have been destroyed. Before-and-after satellite photos distributed by Human Rights Watch reveal that wide swaths of Rakhine state have been destroyed in recent weeks. Last week, U.N. High Commissioner for Human Rights Zeid Ra’ad al-Hussein accused the Burmese government of waging a textbook example of ethnic cleansing. On Tuesday, Human Rights Watch called on the United Nations General Assembly to condemn the Burmese military operation. Meanwhile, Burmese Nobel Peace Prize laureate Aung San Suu Kyi, who is now Burma’s de facto president, is facing mounting criticism for her handling of the violence. Last year, she attended the United Nations General Assembly as Burma’s much-esteemed new civilian leader. This year, she has refrained from attending the gathering, choosing to avoid questions about the Burmese military’s crackdown on the Rohingya. During a nationally televised speech on Tuesday, Suu Kyi refused to blame the military or address the U.N.’s accusation of ethnic cleansing.

Cuban Lawyer Slams Trump as “Enemy to Most of the World” as He Vows Not to Lift Sanctions
Guests are José Pertierra, a Cuban attorney who represented the Venezuelan government in its efforts to extradite Luis Posada Carriles, and Jeri Rice, director of the film “Embargo,” a new documentary about U.S.-Cuba relations premiering this week in New York.