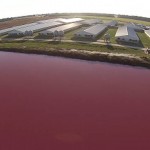 In North Carolina, South Carolina, Virginia and Georgia, millions of residents are bracing for the arrival of Hurricane Florence, which meteorologists are warning could unleash life-threatening storm surges and historic flooding across a wide swath of the East Coast.

NC Lagoons Hold Billions of Gallons of Hog Feces. The Hurricane May Blast That Waste into Waterways
In North Carolina, South Carolina, Virginia and Georgia, millions of residents are bracing for the arrival of Hurricane Florence, which meteorologists are warning could unleash life-threatening storm surges and historic flooding across a wide swath of the East Coast. Even if the storm weakens, experts warn Hurricane Florence could kill thousands of farm animals and trigger catastrophic waste spills from sewage treatment plants, hog waste lagoons and chicken farms. Many of the factory hog farms in North Carolina store their waste by spraying it on nearby fields and neighborhoods, or by depositing it in lagoons that can overflow during hurricanes, causing the toxic pig manure to pour into nearby waterways. Naeema Muhammad is organizing co-director for the North Carolina Environmental Justice Network. Will Hendrick is staff attorney with the Waterkeeper Alliance.

Big Coal Put Toxic Coal Ash in Unlined Dirt Ponds—Now a Hurricane is Heading Directly Toward Them
As the East Coast prepares for Hurricane Florence to make landfall, fear is growing that the storm could result in catastrophic waste spills. Twenty-four toxic coal ash containment ponds in the path of the storm are at risk of flooding in the extreme rainfall. Interviewed are Will Hendrick, staff attorney with the Waterkeeper Alliance, Frank Holleman, senior attorney at the Southern Environmental Law Center, and Bill McKibben, co-founder of 350.org. Bill’s latest piece for the Nation is titled “Jerry Brown’s Climate Legacy Is Still Being Decided.”

Bill McKibben to Jerry Brown: We Must Keep the Oil in the Soil, Limiting Emissions Is Not Enough
Governors, mayors and policy makers from around the world are gathering this week for the Global Climate Action Summit. The conference was organized by California Governor Jerry Brown. The conference begins today just days after Brown signed a new law to shift California to 100 percent carbon-free electricity by 2045. While Brown is hailed as a climate hero, he has been widely criticized by many climate justice activists who are planning to protest outside the opening of today’s conference.