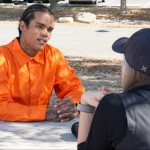 Behind the scenes of California’s raging climate-fueled wildfires are hidden men and women on the front lines of the state’s ever-growing fire season: prisoner firefighters. Of the 13,000 firefighters battling blazes across the state, more than 2,500 are prisoners.

A New Form of Slavery? Meet Incarcerated Firefighters Battling California’s Wildfires For $1 An Hour
Behind the scenes of California’s raging climate-fueled wildfires with the hidden men and women on the front lines of the state’s ever-growing fire season: prisoner firefighters. Of the 13,000 firefighters battling blazes across the state, more than 2,500 are prisoners. While salaried firefighters earn an annual mean wage of $74,000 a year plus benefits, prisoners earn $1 per hour when fighting active fires. According to some estimates, California saves up to $100 million a year by using prison labor to fight its biggest environmental problem. The Democracy Now! team traveled on Sunday to the Delta Conservation Camp, a low security prison about an hour north of San Francisco where more than 100 men are imprisoned. We interviewed incarcerated firefighters who had just returned from a 24-hour shift fighting the Snell Fire in Napa County.

Amika Mota Fought Fires as a Prisoner For 53 Cents/Hour. Now Free, She Can’t Work as a Firefighter
We continue our conversation about California’s incarcerated firefighters with a look at the women fighting the state’s climate change-fueled blazes. We speak with Amika Mota, a former prisoner firefighter. She didn’t even make $1 per hour while on duty as a firefighter—she made just 53 cents. Amika Mota is now the director of prison re-entry at the Young Women’s Freedom Center in San Francisco.

Death on the Dakota Access: Oil & Gas Boom Generates Dangerous Pipeline Jobs Amid Lax Regulationsr
Today in San Francisco, the Rise Against Climate Capitalism conference—a counter-conference to California Governor Jerry Brown’s Global Climate Action Summit—will focus on the common goals of climate activists and labor. That’s also the subject of an explosive new report: “Death on the Dakota Access: An Investigation Into the Deadly Business of Building Oil and Gas Pipelines.” Antonia Juhasz, a longtime oil and energy journalist, talks about her new investigation for Pacific Standard magazine on the deaths of two men who worked on the Dakota Access pipeline, and the massive oil and natural gas boom that has generated some of the deadliest jobs in the country.