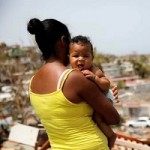 One month after Hurricane Maria devastated Puerto Rico, a major new investigation examines the looming question of what will happen to the island’s $74 billion debt as it faces an estimated $95 billion in storm-related damage.

As Puerto Rico Faces $95 Billion Cleanup, Exposé Reveals Vulture Firms Who Own Its $74 Billion Debt
One month after Hurricane Maria devastated Puerto Rico, a major new investigation examines the looming question of what will happen to the island’s $74 billion debt as it faces an estimated $95 billion in storm-related damage. Reporters at the Center for Investigative Journalism and In These Times spent five months digging through court filings and documents from financial firms, and much more, in order to put together the most up-to-date list of 10 of the largest financial firms that are now scrambling to get billions out of the bankrupt island as it tries to rebuild. Several of the funds were complicit in past financial crises in other parts of the world.

Freed Puerto Rican Political Prisoner Oscar López Rivera on U.S. Colonialism After Hurricane Maria
One month after Hurricane Maria devastated Puerto Rico, longtime Puerto Rican independence activist Oscar López Rivera, who was released in May and is now in San Juan to visit with community members affected by Hurricane Maria, speaks out. Until earlier this year, Rivera had been in federal prison for 35 years—much of the time in solitary confinement—after he was convicted on federal charges of opposing U.S. authority over the island by force. President Obama commuted his sentence in January.

Rosa Clemente on Puerto Ricans Drinking Toxic Water & San Juan Mayor’s Message to the Diaspora
In Puerto Rico, residents desperate for drinking water have begun pumping water from the Dorado Groundwater Contamination Site—a hazardous waste Superfund site. The EPA warns the water contains chemicals that cause liver damage and an increased risk of cancer. Rosa Clemente is just back from Puerto Rico, where she joined other independent journalists in documenting conditions for a project called PR on the Map, including at the Dorado site. She also interviewed San Juan Mayor Carmen Yulín Cruz about her message for the Puerto Rican diaspora.

Why Are Women Prisoners Battling California Wildfires for as Little as $1 a Day?
As raging wildfires in California scorch more than 200,000 acres—roughly the size of New York City—more than 11,000 firefighters are battling the blazes, and a number of them are prisoners, including many women inmates. Romarilyn Ralston, with the California Coalition for Women Prisoners-Los Angeles Chapter, is the program coordinator for Project Rebound at Cal State University. Romarilyn experienced 23 years of incarceration, and while she was incarcerated, she was a fire camp trainer and a clerk for the California Department of Forestry and Fire Protection. Reporter Jaime Lowe also joins us to discuss her New York Times Magazine report, “The Incarcerated Women Who Fight California’s Wildfires.”