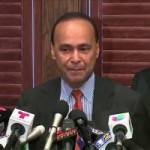 Illinois Congressmember Luis Gutiérrez announced Tuesday he will not seek re-election, because he plans to help rebuild Puerto Rico. This comes as the Federal Emergency Management Agency reportedly gave more than $30 million in contracts to a company called Bronze Star, LLC, which failed to deliver any aid.

In Surprise Move, Illinois Rep. Gutiérrez Won’t Seek Re-Election, Says He’ll Focus on Puerto Rico
Illinois Democratic Congressmember Luis Gutiérrez announced Tuesday he will not seek re-election, because he instead plans to focus on rebuilding Puerto Rico in the wake of Hurricane Maria. This comes as the Federal Emergency Management Agency reportedly gave more than $30 million in contracts to a newly created Florida company called Bronze Star, LLC, which failed to deliver any aid to Puerto Rico.

As GOP Tax Plan Faces Senate Vote, Critics Say Bill Would Give Hundreds of Billions to Top 1 Percent
Republicans are rapidly pushing forward with their efforts to pass President Donald Trump’s tax plan, which would overhaul the tax code in order to shower billions of dollars in tax cuts upon the richest Americans, including Trump’s own family. On Tuesday, the Senate Budget Committee passed the Senate version of the plan, with all Republicans on the panel voting for it and all Democrats voting against. Protesters disrupted the committee hearing Tuesday with chants of “Kill the bill, don’t kill us.” The plan will now go to the full Senate for a vote as early as Thursday. The Senate bill slashes the corporate tax rate and gives further tax cuts to wealthy business owners. It would also repeal a key provision of the Affordable Care Act, the requirement that most Americans have health insurance. Experts say revoking this provision, known as the individual mandate, would cause the cost of health insurance to skyrocket

Graduate Students Plan Nationwide Walkouts Against GOP “Assault” On Post-Secondary Education
More than 40 graduate student walkouts are planned across the country today to protest a measure tucked into the budget bill that passed the House earlier this month that amounts to a pay cut of thousands of dollars for graduate students by reclassifying their tuition waivers as taxable income. Opponents say the move could diminish the number of students who will even consider graduate school and hurt the chances of finishing for current students.

Abuses of Power: Heather McGhee on Matt Lauer, Trump, Sexual Assault, Patriarchy and the Tax Code
As NBC News fires Matt Lauer after accusations of “inappropriate sexual behavior,” guest Heather McGhee, president of Demos, makes the connection between patriarchy and abuses of power in media and government, from the White House and its endorsement of Alabama Senate candidate Roy Moore, to the GOP tax plan that Republicans are pushing toward a vote in the Senate.

Cherokee Writer: Trump Pocahontas Slur Reflects Centuries of Colonial Violence Against Native Women
As Native American Heritage Month winds down, President Donald Trump is opening the door to new drilling and mining on land considered sacred by tribal nations. On Monday, Trump plans to travel to Utah to announce plans to shrink the Bears Ears and Grand Staircase-Escalante national monuments to make way for more industrial activity on the land. The Hopi, Navajo Nation, Ute Mountain Ute Tribe, Pueblo of Zuni and the Ute Indian Tribe all say they will sue to stop the plan. This comes after Trump attempted to insult Massachusetts Sen. Elizabeth Warren by referring to her as “Pocahontas” during a White House ceremony honoring Navajo code talkers, Native Americans who served in the Marines during WWII and used the Navajo language in order to transmit encoded information. Warren says her family is part Cherokee. Mary Kathryn Nagle is a citizen of Cherokee Nation and a partner at Pipestem Law, P.C., a law firm dedicated to the restoration of tribal sovereignty and jurisdiction.