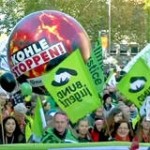 Pacific Climate Warriors Roll Out Anti-Coal “Red Carpet” for Angela Merkel at U.N. Climate Talks
Broadcasting from the U.N. climate summit in Bonn, Germany, today’s show looks at protests underway against oil, coal, gas and nuclear power. Indian activists are demonstrating against India’s largest nuclear power station, the Kudankulam plant in India’s southern state of Tamil Nadu. Activists also disrupted a presentation by the European Investment Bank at an annual corporate conference held alongside the climate summit in Bonn, with a protest against the construction of the Trans Adriatic gas pipeline, known as TAP, which is slated to run from the Greek-Turkish border, under the Adriatic Sea and into Italy. Meanwhile, activists had a special welcome ready for German Chancellor Angela Merkel on Wednesday before her address to the conference.

Special Report from the Occupied Forest: Meet Activists Fighting Europe’s Largest Open-Pit Coal Mine
Reporting from COP23 in Bonn, Germany, Democracy Now! travels to the nearby blockade of the Hambach coal mine, the largest open-pit coal mine in Europe. Activists say the mine extracts an extremely dirty form of coal called lignite, also known as brown coal, which causes the highest CO2 emissions of any type of coal when burned. For more than five years, they have been fighting to shut down the mine and to save the remaining forest from being cut down to make way for the expanding project. Only 10 percent of the ancient forest remains.

Trump Climate Adviser Tells Democracy Now! Coal Needs a “Level Playing Field” at U.N. Climate Talks
This year’s U.N. climate summit in Bonn, Germany, marks the first climate conference since Donald Trump vowed to pull the United States out of the landmark 2015 Paris climate agreement, a process that takes four years. We speak with Trump’s climate adviser David Banks, the White House special assistant for international energy and environment, about his views on climate change and the Trump administration’s stance on the role by humans in inducing climate change. This comes one day after the Trump administration made its official debut at COP23 with a forum pushing coal, gas and nuclear power that included speakers from coal company Peabody Energy, a nuclear engineering firm and a gas exporter.

Scientists Issue Dire Warning on Climate Change & Key Researcher Urges “Changes in How We Live”
At COP23, the International Energy Agency predicts U.S. oil production is expected to grow an an unparalleled rate in the coming years—even as the majority of scientists worldwide are saying countries need to cut down on fossil fuel extraction, not accelerate it. Meanwhile, a group of 15,000 scientists have come together to issue a dire “second notice” to humanity, 25 years after a group of scientists issued the “first notice” warning the world about climate change. The co-author of this report, Kevin Anderson, is one of the world’s leading climate scientists. Anderson is deputy director of the Tyndall Centre for Climate Change Research and professor of energy and climate change at the University of Manchester in Britain. The report is entitled “Can the Climate Afford Europe’s Gas Addiction?”