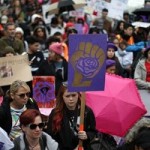 Today is International Women’s Day, and thousands of women are staging a one-day strike in what’s been dubbed a Day Without a Woman. The impact of the strike is already being felt in the United States. In Virginia, the entire public school system of Alexandria is closed today after 300 women requested the day off.

Women in More Than 50 Countries Set to Strike Today on International Women’s Day
Today is International Women’s Day, and thousands of women are staging a one-day strike in what’s been dubbed a Day Without a Woman. The impact of the strike is already being felt in the United States. In Virginia, the entire public school system of Alexandria is closed today after 300 women requested the day off. Some schools are also closing in Chapel Hill, North Carolina, and in New York City. The U.S. Women’s Strike was called by organizers of the Women’s March on Washington, the largest nationwide day of protest after an inauguration in U.S. history. And women in the United States are not alone. Women in more than 50 countries are expected to take part in their own strikes. The International Women’s Strike effort was launched in October 2016 after women in Poland, South Korea, Argentina and Sweden organized strikes to fight issues from the criminalization of abortion to femicide.

Eve Ensler & Christine Schuler Deschryver on the Predatory Mindset of President Trump
When President Trump signed his first executive order in January to temporarily ban refugees and people from seven majority-Muslim nations, he said it was needed, in part, to protect women. A little-noticed part of the executive order reads, “The United States should not admit those who engage in acts of bigotry or hatred, including ‘honor’ killings, other forms of violence against women.” Some observers have noticed the irony in the executive order. Both the man who signed the order, Donald Trump, and the man who drafted the order, his chief strategist, Stephen Bannon, have in the past been accused of committing violence against women. During the presidential campaign, Trump famously boasted about sexually assaulting women and grabbing them “by the pussy,” in a leaked video recorded by NBC’s “Access Hollywood.” Eight women have now come forward and accused Donald Trump of sexual assault and harassment. And Trump is not alone. Stephen Bannon was charged with domestic violence and battery in 1996. Trump’s first pick to be labor secretary, fast-food giant CEO Andrew Puzder, was accused of domestic abuse by his ex-wife, who even went on “Oprah” in disguise to speak about domestic violence.

RIP Lynne Stewart, People’s Lawyer & Fmr. Political Prisoner; Watch Her Interviews & Release in 2014
Radical civil rights attorney Lynne Stewart died Tuesday at her home in Brooklyn from complications of cancer and a recent series of strokes. She was 77 years old. A former teacher and librarian, Stewart was known as a people’s lawyer who represented the poor and revolutionaries. Many considered her a political prisoner herself when she was given a 10-year sentence for distributing press releases on behalf of one of her clients, Omar Abdel-Rahman, an Egyptian cleric known as the “blind Sheikh,” who was convicted of conspiring to blow up the United Nations and other New York City landmarks.

Latina Actress America Ferrera: When Trump Says “America First” He is Not Including Me & My People
Backstage at the Women’s March on Washington, Amy Goodman caught up with America Ferrera to talk about President Trump, immigration policy, reproductive rights and more. Ferrera is a Honduran-American actress best known for her role in “Ugly Betty.”