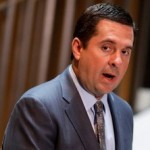 Calls are growing for House Republican Intelligence Committee Chair Devin Nunes to step down from his committee’s investigation into possible collusion between the Trump campaign and Russia. On Tuesday, the committee was scheduled to hear testimony from former acting Attorney General Sally Yates. But Nunes canceled the hearing last week.

House Probe into Trump Campaign Ties to Russia in Turmoil as Chair Nunes Rejects Calls to Step Down
On Capitol Hill, calls are growing for House Republican Intelligence Committee Chair Devin Nunes to step down from his committee’s investigation into possible collusion between the Trump campaign and Russia, as the investigation itself stalls amid the controversy. On Tuesday, the House Intelligence Committee was scheduled to hear testimony from former acting Attorney General Sally Yates. But Nunes canceled the hearing last week, a day after Yates and former CIA head John Brennan, who was also slated to testify Tuesday, informed the government they would contradict some statements that White House officials had made. The Washington Post is reporting the White House sought to block Yates’s testimony. White House Press Secretary Sean Spicer called this report “100 percent false.”

The House Intelligence Committee has now canceled all meetings this week. Lawmakers are calling on Nunes to step down as chair, after it emerged he had met with a source on the grounds of the White House and viewed secret U.S. intelligence reports before supposedly briefing President Trump about the reports. Nunes says the reports indicate Trump or his associates might have been “incidentally” swept up in surveillance carried out by American spy agencies as they conducted foreign surveillance. Guest is Michael Isikoff, chief investigative correspondent for Yahoo! News. His new piece is titled “Russia probe in turmoil as top Dem calls for Nunes’ recusal.”

Jared Kushner & Paul Manafort Sought for Questioning over Russia But Will It Be Behind Closed Doors?
Trump’s son-in-law Jared Kushner has agreed to testify to the U.S. Senate committee investigating ties between the Trump campaign and Russia during the 2016 election. He may also face questioning over a December meeting with the head of a U.S.-sanctioned Russian state development bank known as VEB. President Obama imposed the sanctions in 2014 over Russia’s military actions in Ukraine. The bank disclosed the meeting on Monday and said Kushner was acting as “the head of Kushner Companies.” This information contradicts the statements of White House Press Secretary Sean Spicer, who said on Monday that Kushner was acting as a Trump adviser during the meeting, not as a private developer. The revelations came on the same day Kushner agreed to testify to the Senate committee.

Trump Dismantles U.S. Climate Rules, Virtually Ensuring U.S. Will Break Paris Accord Promises
Trump signed an executive order Tuesday to dismantle a slew of climate rules established by President Obama. If carried out, the executive order will virtually guarantee that the United States will fail to meet its 2015 Paris Agreement pledge to reduce emissions in order to curb the effects of climate change. The executive order marks the first step to undo Obama’s Clean Power Plan to limit emissions and replace coal-fired power plants with new solar and wind farms.

As Trump Complains About Alleged Surveillance, Republicans Gut Internet Privacy Rules
On Tuesday, the House narrowly voted to allow internet providers to sell your web browsing history and other personal information. The vote will give companies like Verizon, Comcast and AT&T more power to collect people’s sensitive data, including their internet browsing history, and to sell this information. Last week, the Senate also approved the measure in a vote largely split across party lines. Trump is expected to sign the bill.