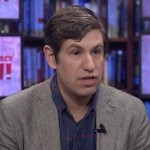 At least 12 states are moving to sue the Trump administration over plans to add a question about citizenship to the upcoming census. Voting rights activists fear the question will deter immigrants from participating in the census, leading to a vast undercount.

Journalist Ari Berman: If Trump Is Allowed to Rig the Census, Then All of U.S. Democracy Is Rigged
A new battle is brewing over the 2020 U.S. census. At least 12 states are moving to sue the Trump administration over plans to add a question about citizenship to the upcoming census. Voting rights activists fear the question will deter immigrants from participating in the census, leading to a vast undercount in states with large immigrant communities. This could impact everything from the redrawing of congressional maps to the allocation of federal funding. On Tuesday, White House spokesperson Sarah Huckabee Sanders said the decision to add a citizenship question was “necessary for the Department of Justice to protect voters.” At least five former directors of the Census Bureau, who served under Republican and Democratic presidents, have written a letter opposing the citizenship question.

Chelsea Manning’s Platform for U.S. Senate: Abolish ICE, Dismantle Prisons, Healthcare for All
On Tuesday, Democracy Now! interviewed Chelsea Manning in her first live TV interview. She was released from prison last May after serving seven years for leaking a trove of documents about Iraq and the Afghan wars and the State Department to WikiLeaks in 2010. Manning is now running for U.S. Senate in Maryland. In part two Manning talks more about her run for the U.S. Senate, trans rights and whistleblowing.

Killed in Cold Blood: Alton Sterling’s Family Decries Decision Not to Charge Officers for Murder
Louisiana Attorney General Jeff Landry has announced the state will not bring charges against two white police officers from Baton Rouge for the 2016 killing of Alton Sterling, an African-American father of five. Bystander video shows Sterling was pinned to the ground by the two police officers when they shot him. Alton Sterling’s killing sparked nationwide protests. It’s the latest case in which authorities have refused to bring charges against officers for killing civilians, despite video evidence of the killings and mass protests demanding accountability for the death.