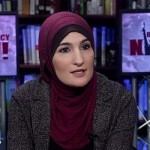 In his first speech to a joint session of Congress, Donald Trump vowed to greatly expand the Pentagon’s budget, to repeal and replace Obamacare, to build a wall along the border with Mexico and to crack down on undocumented immigrants. Muslim American organizer Linda Sarsour took part in a roundtable discussion.

Not My President: Muslim American Activist Linda Sarsour on Turning Down Invite to Trump Speech
In his first speech to a joint session of Congress, Donald Trump vowed to greatly expand the Pentagon’s budget, to repeal and replace Obamacare, to build a wall along the southern border with Mexico and to crack down on undocumented immigrants in the name of national security. Muslim American organizer Linda Sarsour took part in a roundtable discussion. She was invited to attend the speech but opted not to.

Trump Seeks Record Pentagon Budget Eclipsing Spending by Ronald Reagan & George W. Bush
President Trump has proposed increasing the military budget to just over $600 billion—a 10 percent increase—while deeply slashing the budgets of other agencies, likely including the Environmental Protection Agency and the State Department. Speaking to a joint session of Congress, Trump said, “I am sending the Congress a budget that rebuilds the military, eliminates the defense sequester and calls for one of the largest increases in national defense spending in American history.”

“Trump Is Resurrecting the Scare Tactics”: Prof. Kelly Lytle Hernández on Trump’s Deportation PlansOn Tuesday night, President Trump suggested the United States should transition to a merit-based immigration system. He also vowed to build a wall along the southern border with Mexico and to crack down on undocumented immigrants in the name of national security.

Linda Sarsour: Muslim Americans Have Now Raised Over $125,000 for Vandalized Jewish Cemeteries
President Trump opened his speech to Congress by condemning the five nationwide waves of bomb threats targeting Jewish community centers, the desecration of hundreds of gravesites at two Jewish cemeteries and the murder of an Indian man in Kansas by a white man who reportedly yelled “Get out of my country!” before opening fire. But he made no mention of recent attacks targeting mosques. His speech came just hours after he suggested the anti-Semitic incidents may be false-flag attacks. Guest Linda Sarsour has helped raise over $125,000 for vandalized Jewish cemeteries.

In Move Recalling Nazi-Era Policies, Trump to Create Office to Track Crimes Committed by Immigrants
During Trump’s speech to the joint session of Congress last night, he announced plans to create a new office called VOICE—that’s Victims of Immigration Crime Engagement. Trump has previously directed the Department of Homeland Security to publish a list of crimes committed by immigrants—which some historians have compared to Germany’s Nazi-era policy of publishing lists of crimes committed by Jews.

Disabled Cancer Survivor Ola Ojewumi: I am Terrified by Trump’s Push to End Obamacare
During his speech before Congress on Tuesday night, Donald Trump called on Congress to address the “imploding Obamacare disaster.” “Tonight, I am also calling on this Congress to repeal and replace Obamacare with reforms that expand choice, increase access, lower costs and at the same time provide better healthcare,” Trump said. “Mandating every American to buy government-approved health insurance was never the right solution for America.” Guest Ola Ojewumi is a disabled 26-year-old community activist who attended Trump’s speech as a guest of Maryland Congressmember Steny Hoyer, as someone affected by the Affordable Care Act. She is a cancer survivor who has also had a kidney and heart transplant.

Trump Honors Widow of Navy SEAL Killed in Yemen, But Ignores His Father’s Calls for Investigation
During Trump’s speech to Congress last night, he also honored Navy SEAL Ryan Owens, who was killed in a botched raid on a Yemeni village that also left 25 civilians dead, including nine children under the age of 13. Last night, Trump referred to the raid as being “highly successful” and spoke directly to Ryan’s widow, Carryn Owens. After a two-minute standing ovation, Trump said, “And Ryan is looking down right now. You know that. And he’s very happy, because I think he just broke a record.” Trump made no reference to the 25 civilians killed in the raid, nor to the criticisms leveled by Owens’s father, who has questioned why the raid was ever approved.

Linda Sarsour on March 8 “Day Without a Woman” Strike & Continuing to Organize Against Trump
Following Trump’s address to a joint session of Congress Tuesday night, many media outlets began to cast his presidency in a new, more moderate light. However, activists and organizers say Trump’s presidency will not be normalized simply because he has learned to read from a teleprompter.