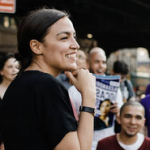 28-Year-Old Socialist Alexandria Ocasio-Cortez Wins Primary, Backing Medicare for All & Abolishing ICE
In a stunning upset and the biggest surprise of the primary season this year, 28-year-old Democratic Socialist Alexandria Ocasio-Cortez beat 10-term incumbent Representative Joe Crowley in New York in Tuesday’s Democratic primary. Crowley is the fourth-ranking Democrat in the House, and he’d outraised Ocasio-Cortez by a 10-to-1 margin. Crowley was widely viewed as a possible future House speaker. Yet Ocasio-Cortez defeated Crowley after running a progressive grassroots campaign advocating for “Medicare for All” and the abolition of ICE, the Immigration and Customs Enforcement agency. Ocasio-Cortez speaks to Democracy Now! about her historic campaign.

SCOTUS Backs Muslim Travel Ban; Critics Liken It to Decisions on Segregation & Japanese Internment
In a series of extraordinary legal decisions Tuesday, the Supreme Court has upheld President Trump’s so-called Muslim travel ban, and a federal judge in San Diego has ruled immigration officials must stop separating immigrant children from their parents at the border and must reunite all parents and children within 30 days. On Tuesday, the Supreme Court ruled 5 to 4 to uphold Trump’s travel ban, which prohibits people from entering the United States from five majority-Muslim countries—Iran, Libya, Yemen, Syria and Somalia—as well as people from North Korea and some government officials from Venezuela. In a scathing dissent, Justice Sonia Sotomayor condemned the ban as “harrowing” and said it was “motivated by hostility and animus toward the Muslim faith.” She also said the decision to uphold the ban involved “ignoring the facts, misconstruing our legal precedent and turning a blind eye to the pain and suffering the proclamation inflicts upon countless families and individuals, many of whom are United States citizens.” After the ruling was announced, protesters gathered outside the Supreme Court to condemn the decision.