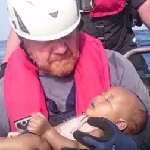 On Monday, a photo of a German volunteer from the group Sea-Watch holding the body of a drowned child became the latest symbol of the migration crisis. Ruben Neugebauer, who is a Sea-Watch spokesperson and crew member, described European policy as “a system of letting people die willingly because we refuse any other safe way to get into the European Union.” 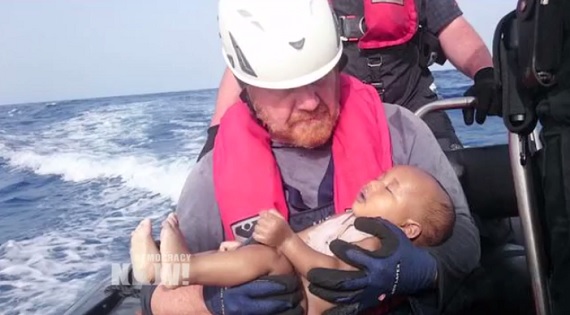 The now-famous photo, published by Sea-Watch, of a volunteer holding a drowned baby. Image: video still

Up to 1,000 refugees are feared to have drowned in recent days while trying to cross the Mediterranean Sea. The United Nations say this marks one of the highest weekly death tolls since the migrant crisis began in 2014.

UNICEF says many of the victims were youth fleeing war and violence in their home countries. The majority of the refugees were from Eritrea, Nigeria, Somalia and South Sudan. Under a European Union plan enacted in April, all refugees arriving in Greece are deported back to Turkey, forcing people to attempt the more dangerous route between Libya and Italy.

On Monday, a photo of a German volunteer from the group Sea-Watch holding the body of a drowned child became the latest symbol of the migration crisis. Ruben Neugebauer, who is a Sea-Watch spokesperson and crew member, described European policy as “a system of letting people die willingly because we refuse any other safe way to get into the European Union.” He went on to speak about the photo above:

It’s always a difficult decision to publish that kind of photos. But in this specific case, we thought the graveness of the situation simply forces us kind of to publish that picture, because the European society has to acknowledge that kind of picture, because this picture is a result of our policy. It’s a result of the policy to shut down borders and to force people onto that boat. The European Union is using the Mediterranean Sea as its castle ditch, filling it up with dead bodies to scare off those who might come after them, so we let them die willingly. And so, the discussion should not be about whether we should publish that kind of picture. The discussion should be about if we let those pictures happen.

Also today, the Organization of American States has announced it will hold an emergency meeting to discuss whether to suspend Venezuela for violating the OAS Charter. OAS Secretary General Luis Almagro said Tuesday that Venezuela had suffered “grave alterations of democratic order.” But supporters of Venezuelan President Nicolás Maduro have criticized the OAS for targeting Venezuela, not Brazil, where democratically elected President Dilma Rousseff was recently removed from power in what many have described as a coup.

In early August, more than 10,000 athletes across the world will convene in Rio de Janeiro’s Olympic City for one of the most widely watched sporting events of the year. This comes as Brazil is battling an economic recession, a massive Zika outbreak and its worst political crisis in over two decades. Protesters have vowed to flood the streets during the Olympics, using the global spotlight to highlight a raft of domestic grievances including threats to social services, police violence, forced displacement and the recent ouster of democratically elected President Dilma Rousseff.