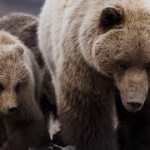 The Trump administration has announced plans to gut the Endangered Species Act, ordering federal agencies to consider economic impacts before listing animals to be protected under the law. This would allow corporations involved in mining, drilling or other forms of extraction to proceed with projects that would otherwise be prohibited.

Profit Over Grizzlies: Trump Admin Tries to Gut Endangered Species Act for Oil & Mining Interests
The Trump administration has announced plans to gut the Endangered Species Act, ordering federal agencies to consider economic impacts before listing animals to be protected under the law. The newly proposed guidelines by the Interior Department would allow corporations involved in mining, drilling or other forms of extraction to proceed with projects that would otherwise be prohibited. The Trump administration’s proposed rules are among several recent attacks endangering the Endangered Species Act. Earlier this month, the Congressional Western Caucus introduced a package of nine bills to “modernize” the ESA. In introducing the legislation, Republican Congressmember Don Young of Alaska said, “The Endangered Species Act has been weaponized and misused by environmental groups for too long.”

Trump’s War on the Environment, from Attacking California Fuel Standards to Destroying Public Lands
While climate change denier Scott Pruitt has been ousted as administrator of the Environmental Protection Agency over a slew of corruption scandals and his close ties to industry lobbyists, the Trump administration’s war on the environment and environmental regulations continues unabated.

As Heat Wave Sweeps the Globe, New Study Warns of Deadly Link Between Rising Temps and Suicide
As deadly fires and heat waves kill scores across the globe, a new study published in the journal Nature Climate Change reports that when there are abnormally hot temperatures, there also tend to be higher suicide rates. The study warns up to 26,000 more people could die by suicide in the United States by 2050 if humans don’t reduce emissions of greenhouse gas pollution.

“Why Abolish ICE Doesn’t Go Far Enough”: Oscar Chacón on the Roots of Trump’s Immigration Crackdown
We turn now to a leading Central American activist’s response to the crisis prompting thousands in Honduras, El Salvador and Guatemala to seek asylum in the United States. This week, the Trump administration announced it may have deported up to 463 parents of children separated by immigration officials at the border, even as their children remain in U.S. custody. This comes as a federal judge has ordered the Trump administration to reunite all separated migrant children and parents by Thursday, July 26.