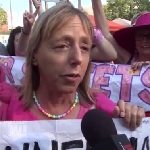 It’s now official: Donald Trump has become the presidential nominee of the Republican Party. The announcement was made by House Speaker Paul Ryan after a roll call vote at the convention in Cleveland. Meanwhile, as the NRA’s chief lobbyist spoke at the convention, anti-gun activists protested nearby against the fact that civilians are being allowed to carry military-grade weapons in downtown Cleveland this week but can’t have items such as tennis balls, cans or umbrellas. 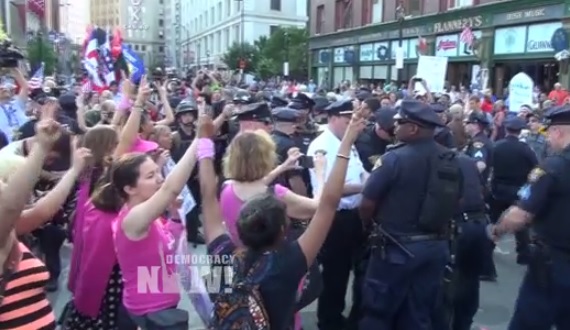 It’s now official: Donald Trump has become the presidential nominee of the Republican Party. The announcement was made by House Speaker Paul Ryan after a roll call vote at the convention in Cleveland. He received the formal nomination only one day after delegates from the “Never Trump” movement briefly staged a revolt against Trump on Monday. The rebellion threw the first day of the convention into chaos, but the effort was quashed by party leadership. Some dissenting delegates booed during Tuesday’s roll call vote. Amy Goodman spoke to The Nation’s John Nichols, author of the new piece, “Trump Is Officially the GOP Nominee—but Republicans Aren’t Exactly Celebrating.”

Roger Ailes’s lawyers have confirmed he’s in negotiations to step down as Fox News chair amid more than a half-dozen accusations of sexual harassment. For 20 years, the former Republican operative has been the most powerful man in the conservative media world. The scandal began when former Fox anchor Gretchen Carlson sued Ailes. Now, Fox anchor Megyn Kelly has also accused him of harassment. Many are celebrating Ailes’s anticipated departure, though as Feministing founder Jessica Valenti notes, “Removing one lascivious man can’t turn around the mess of misogyny that is Fox News.” Carlson’s suit also alleges Fox News has an overall misogynistic culture.

For the first time ever, the National Rifle Association sent its chief lobbyist to the Republican National Convention. According to the NRA, Chris Cox became the group’s first official to ever speak at a political convention. Cox warned that a Hillary Clinton presidency would endanger one’s right to own a gun. While Cox spoke inside the convention on Tuesday, anti-gun activists held their own protest just outside the security gates against the fact that civilians are being allowed to carry military-grade weapons in downtown Cleveland this week but can’t have items such as tennis balls, cans or umbrellas. Democracy Now! was there when antiwar group CodePink teamed up with the Brady Campaign to Prevent Gun Violence to deliver 500 tennis balls to the front steps of the Republican National Convention.

Immigration has been a common theme throughout the first two nights of the Republican National Convention. On Monday, speakers included two mothers whose sons were killed by undocumented immigrants. But a new report by the American Immigration Council, that won’t likely be cited by any speakers at this year’s Republican National Convention, finds immigrants are less likely than the native-born to engage in criminal behavior and that higher immigration is associated with lower crime rates. Walter Ewing, a senior researcher at the American Immigration Council, joined the show. His recent article is “Republican Party Platform Shows Little Understanding of Immigration Policy.”

The Republican Party has officially adopted Donald Trump’s proposal to build a wall along the U.S.-Mexico border in its official party platform. The new platform states: “The border wall must cover the entirety of the southern border and must be sufficient to stop both vehicular and pedestrian traffic.” In response, immigrant rights activists have decided to build a wall of their own here in Cleveland around the Republican National Convention. Mijente, the Ruckus Society, Iraq Veterans Against the War, The Other 98% and the Working Families Party are working together to construct the wall.

One of the most animated moments of the Republican National Convention on Tuesday night came during a speech by New Jersey Governor Chris Christie, who was a finalist to be Donald Trump’s running mate. Christie staged a mock trial of Hillary Clinton. During his speech about Hillary Clinton, Republican delegates repeatedly broke into chants of “Lock her up!” But Christie is immersed in his own scandal. Five of the governor’s appointees have drawn the attention of federal prosecutors over corruption allegations. and one of his close allies has just pleaded guilty to federal bribery charges. After Christie’s speech, Hillary Clinton tweeted, “If you think Chris Christie can lecture anyone on ethics, we have a bridge to sell you.”

“Make America Work Again.” That was the theme Tuesday night at the Republican National Convention here in Cleveland. Well, on Tuesday, Democracy Now!’s Carla Wills went out on the streets of Cleveland to talk to some of the vendors who are selling everything from Make America Great Again hats to a cereal called Trump Flakes.

Democracy Now! visited Cudell Park, where Tamir Rice was gunned down by two officers in November of 2014 while he was playing with a toy pellet gun. A 911 caller reported seeing Rice with a weapon, but noted it was “probably fake.” That information was not relayed to the responding officers, who shot him within two seconds of arriving at the scene. A grand jury failed to bring charges against either of the officers. In April, Cleveland officials agreed to pay $6 million to settle a lawsuit by the family of Tamir Rice. Nina Turner, who is a former state senator and former city councilmember whose son is a police officer and husband is a retired police officer, discussed how this case highlights the value gap between Black and White lives.

Activists in several cities are attempting to shut down the offices of two major police unions: the Fraternal Order of Police and the Patrolmen’s Benevolent Association. In Washington, D.C., activists with Black Youth Project 100 and Black Lives Matter have locked themselves to the steps of the Fraternal Order of Police with chains. In New York City, activists with Million Hoodies and BYP 100 have locked themselves to each other using PVC pipes at the entrance to the Patrolmen’s Benevolent Association. The activists are demanding police officers stop paying dues to the private unions, which they accuse of defending officers accused of brutality.

Students at Case Western Reserve University, located nearly five miles from the arena hosting the RNC, are protesting the university’s decision to house 1,900 armed police officers and National Guardsmen in campus dormitories during the convention. The security officers are part of an auxiliary force assisting the Cleveland Police Department during the event. Last Monday, the university announced a virtual shutdown of its operations during the convention, citing concerns that the recent shootings in Dallas, Louisiana and Minnesota could provoke a “significant degree of conflict” in the city.