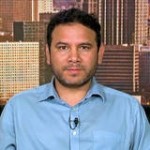 The U.N. high commissioner for human rights says the death toll from anti-government protests in Nicaragua is approaching 300, as an escalating crisis in the country reaches its third month. Both opposition groups and pro-government forces are accused of violence, including kidnappings and killings.

Debate on Political Crisis & Violent Deaths in Nicaragua: Camilo Mejía vs. Julio Martinez Ellsberg
The U.N. high commissioner for human rights says the death toll from anti-government protests in Nicaragua is approaching 300, as an escalating crisis in the country reaches its third month. Both opposition groups and pro-government forces are accused of violence, including kidnappings and killings. Julio Martinez Ellsberg, adviser to one of the main student movements opposing the Nicaraguan government, debates Camilo Mejía, well-known Nicaraguan-American Iraq War resister and son of the famed Sandinista singer Carlos Mejía Godoy.

On Mandela’s 100th Birthday, Rev. Jesse Jackson Remembers His Vision of Anti-Racist Democracy
Today marks the 100th birthday of Nelson Mandela, perhaps the world’s most famous former political prisoner. He was imprisoned 27 years in South Africa before his release in 1990. He was elected the country’s first black president four years later. On Tuesday, former President Barack Obama spoke in Johannesburg at an event marking the centennial and used his first major address since stepping down as president to issue thinly veiled criticism of President Trump. Mandela’s close friend, Rev. Jesse Jackson, civil rights leader and the founder and president of the Rainbow/PUSH Coalition, responds to this and to the recent U.S.-Russia summit, and discusses his upcoming peace mission to South Korea.

Four Years After Eric Garner’s Killing in Police Chokehold, His Family Still Seeks Accountability
Tuesday marked four years since Eric Garner was killed, when a white New York City police officer wrestled him to the ground, pinned him down and applied a fatal chokehold, while Garner said “I can’t breathe” 11 times. The incident was captured on a cellphone video and spurred mass protests. On Monday, NYPD announced it plans to move forward with long-delayed internal disciplinary proceedings against the officers involved, if the Department of Justice does not announce criminal charges by August 31. Officer Daniel Pantaleo, who applied the fatal chokehold, continues to work for the New York Police Department on paid desk duty and has received multiple raises since Garner’s death. Garner’s mother Gwen Carr called for justice at a press conference this week. Her forthcoming memoir is titled “This Stops Today: Eric Garner’s Mother Seeks Justice After Losing Her Son.”