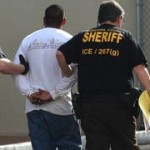 The Supreme Court ruled Tuesday that federal authorities can continue to indefinitely detain some immigrants and asylum seekers without a bond hearing. The 5-3 ruling overturned the rulings of two lower courts that found immigrants facing prolonged detention must be given a custody hearing.

Cruel & Unconstitutional: ACLU Denounces SCOTUS Ruling Approving Indefinite Immigrant Detention
The Supreme Court ruled Tuesday that federal authorities can continue to indefinitely detain some immigrants and asylum seekers without a bond hearing. The 5-3 ruling overturned the rulings of two lower courts that found immigrants facing prolonged detention must be given a custody hearing. But Tuesday’s Supreme Court decision does not end the battle over indefinite detention. The justices sent the case back to the federal appeals court to evaluate the constitutionality of the practice. Tuesday’s decision came a day after the Supreme Court dealt a blow to President Trump’s efforts to rescind DACA, the Obama-era Deferred Action for Childhood Arrivals program, which gives at least 700,000 young immigrants permission to live and work in the United States. The court refused to hear a White House appeal of lower court rulings saying Trump’s move to cancel the program was unconstitutional.

How the “Black Panther” Film Is “A Defining Moment for Black America”
As Black History Month wraps up, we look at the record-breaking movie “Black Panther.” Since the release of “Black Panther” earlier this month, fans have crowdfunded campaigns to ensure children can see the film in theaters, teachers have incorporated the movie’s core themes of anti-colonialism and cultural representation into their curriculum, and activists have used film screenings to hold mass voter registration drives. The movie has also renewed calls for the release of more than a dozen imprisoned members of the real Black Panther Party. “Black Panther” has also ignited a firestorm of impassioned social commentary online among fans and detractors alike.

Afrofuturism, Liberation & Representation in “Black Panther”: A Roundtable Discussion
While “Black Panther” has broken box office records, it has also generated an intense debate. This segment features a roundtable with three guests: Christopher Lebron, a professor at Johns Hopkins University who recently wrote “Black Panther Is Not the Film We Deserve”; Robyn C. Spencer, a professor at Lehman College, who wrote “Black Feminist Meditations on the Women of Wakanda”; and Carvell Wallace, author of The New York Times Magazine story “Why Black Panther Is a Defining Moment for Black America.”