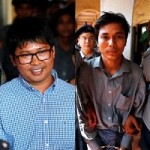 In Burma, two journalists from the Reuters news agency have entered their third month in jail. Wa Lone and Kyaw Soe Oo were arrested on December 12 and charged with violating Burma’s Official Secrets Act. They have been denied bail and face up to 14 years in jail.

Two Reuters Journalists Face 14 Years in Burmese Prison After Exposing Massacre of Rohingya Muslims
In Burma, two journalists from the Reuters news agency have entered their third month in jail. Wa Lone and Kyaw Soe Oo were arrested on December 12 and charged with violating Burma’s Official Secrets Act. They have been denied bail and face up to 14 years in jail. At the time of their arrest, they were investigating a massacre committed by the Burmese military targeting Rohingya Muslims in the village of Inn Din in September. While the two journalists remain in prison, other journalists with Reuters have continued to piece together what happened in Inn Din. In a shocking new exposé, Reuters reports Burmese soldiers and members of an informal militia executed 10 Rohingya Muslim captives. At least two of the men were hacked to death. The others were shot.

Rep. Pramila Jayapal: Trump’s Immoral Budget Punishes the Poor, Sick & Elderly
President Trump’s $4.4 trillion budget proposes deep cuts to education, healthcare and social safety net programs—while massively increasing the Pentagon’s budget. Trump’s plan would slash the Department of Education’s budget by more than 10 percent. It would sharply reduce income-based student loan repayment plans, while ending the Public Service Loan Forgiveness Program. Trump’s budget would cut more than $17 billion from the Supplemental Nutrition Assistance Program—or SNAP—barring food stamp recipients from buying fresh fruit and vegetables, and instead providing only a boxed food delivery program. The budget would also phase out federal funding for the Corporation for Public Broadcasting, which supports public and community radio and TV stations. This comes as McClatchy reports the Trump administration is considering a plan that would not only impose work requirements for Medicaid enrollees, but which would also put a lifetime limit on adults’ access to Medicaid. Meanwhile, Trump’s budget would see a 13 percent rise in spending on weapons and war, bringing the Pentagon’s budget to $686 billion.

As Lawmakers Debate Future of DACA, What Will It Take for Democrats to Protect DREAMers?
Lawmakers on Capitol Hill are continuing to debate the future of DACA, the Obama-era Deferred Action for Childhood Arrivals program, which gives some 800,000 young undocumented immigrants permission to live and work in the United States. Republican lawmakers are pushing to include an amendment to punish so-called sanctuary cities as part of any immigration legislation to protect DREAMers. Meanwhile, a second federal judge has temporarily blocked the Trump administration from canceling DACA. On Tuesday, Judge Nicholas Garaufis in New York issued an injunction to keep the program temporarily in place, warning its cancellation would have “profound and irreversible” social costs, writing, “It is impossible to understand the full consequences of a decision of this magnitude.” For more, we speak with Rep. Pramila Jayapal (D-WA), vice ranking member of the House Budget Committee and vice chair of the Congressional Progressive Caucus.

As Porter Domestic Violence Scandal Roils WH, Lawmakers Demand Kelly’s Ouster & Trump’s Impeachment
Rep. Pramila Jayapal talks about the scandal embroiling the White House over former Staff Secretary Rob Porter, who resigned after evidence surfaced that he had abused his two ex-wives. On Tuesday, FBI Director Christopher Wray testified to the Senate that the FBI had told the White House about the physical and verbal abuse allegations that were holding up Porter’s background check months earlier than the White House has admitted. Jayapal talks about why she has called for White House Chief of Staff John Kelly to resign, as well as her support for impeachment proceedings against Trump.

V-Day: Global Movement to Stop Violence Against Women and Girls Marks 20th Anniversary
As the White House is facing an escalating scandal over how it ignored the serious accusations of former Staff Secretary Rob Porter’s verbal and physical violence against his two ex-wives, we end today’s show looking at the worldwide movement called V-Day to stop violence against women and girls. Today marks the 20th anniversary of the V-Day movement, which was inspired by Eve Ensler’s groundbreaking play “The Vagina Monologues.”