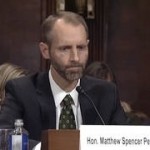 With the confirmation of a 12th Circuit Court judge earlier this month, Trump set a record for the most appellate judges confirmed in a president’s first year in office. Legal experts say Trump’s appointments to the lower courts will have the most impact on American life because they decide nearly all cases.

Former Federal Judge: Trump Is Packing the Courts with Unqualified Conservative Extremists
With the confirmation of a 12th Circuit Court judge earlier this month, Trump set a record for the most appellate judges confirmed in a president’s first year in office. Early in his first year, Trump appointed conservative Supreme Court Justice Neil Gorsuch. But legal experts say Trump’s appointments to the lower courts will have the most impact on American life because they decide nearly all cases, ranging from voting rights and contraception to gay rights and immigration. Meanwhile, Trump’s nominee to a lifetime appointment on the U.S. District Court in Washington withdrew from consideration, after widely circulated video showed he was unable to answer basic questions about the law and had never tried a case in court.

Meet the Federal Judge Trump Attacked for Ruling NYPD’s Stop & Frisk Policy was Unconstitutional
Judge Shira Scheindlin, former United States district judge for the Southern District of New York, speaks about her role in a case that found the controversial police policy of stop-and-frisk unconstitutional. While running for president, Donald Trump called for a nationwide stop-and-frisk program. “It was a bad policy,” Judge Scheindlin says. “It was not effective law enforcement … It obviously wasn’t deterring crime. All it was doing was alienating the community from the police.”

Outgoing NY City Council Speaker on Her Work to Close Rikers, Expand Living Wage, Protect Immigrants
We look at one of the most progressive city councils in New York City’s history and the woman who helped lead the agenda: Speaker Melissa Mark-Viverito, who occupies the second most powerful post in city government. Mark-Viverito was first elected to New York City Council in 2005 and was named speaker in 2014. During her time as speaker, the council expanded living wage requirements, expanded paid sick leave, established a city bail fund and a municipal identification card for undocumented immigrants, limited cooperation between immigration authorities and the city’s police and jails, also funded free legal advice for immigrants in detention who face deportation. During her tenure, she also got Mayor Bill de Blasio to agree to close the city’s notorious Rikers Island jail.