An Alternative State of the Union: Progressives on Obama’s Legacy & Their Hopes for His Final Year. We are honored to offer this broadcast as part of our affiliation with the Pacifica Network.

President Obama’s State of the Union Tuesday night was the seventh and final of his presidency. Obama defended his record while implicitly criticizing the Republican candidates who want to succeed him. While mostly avoiding specific policy proposals, Obama spoke out against stigmatizing vulnerable communities, including Muslims, immigrants and lower-income Americans. He defended his historic agreements with Iran and Cuba while touting the U.S. as “the most powerful nation on Earth.” Obama called for change in the U.S. political system to stop the outsize influence of wealthy donors, and urged Congress to take meaningful action on climate change—including stopping its denial. We host a roundtable discussion on President Obama’s final SOTU and progressive hopes for his last year in office with five guests: Maryland Democratic congresswoman and U.S. Senate candidate Donna Edwards; public TV broadcaster and author Tavis Smiley; Black Lives Matter co-founder Alicia Garza; CodePink founder Medea Benjamin; and migrant justice activist and military veteran Claudia Palacios. 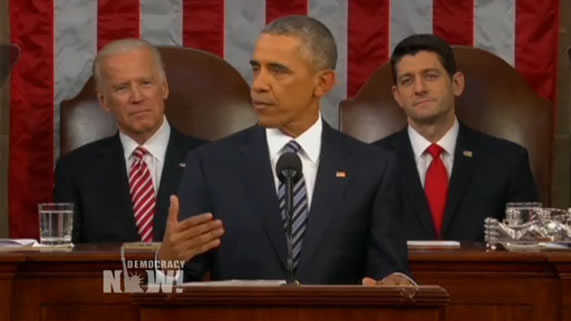 An Alternative State of the Union: Progressives on Obama’s Legacy & Their Hopes for His Final Year.