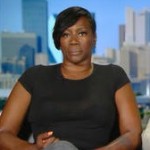 A Texas woman has been sentenced to five years in prison for illegally voting. Crystal Mason cast a provisional ballot in the 2016 presidential election despite having a past felony conviction for tax fraud that prevented her from voting. She says she didn’t know she was barred from casting a ballot.

Top Student Loan Watchdog Resigns over Trump Admin Doing Bidding of Predatory Lenders
As the school year begins this week across the United States, the top student loan watchdog has resigned in protest, accusing the Trump administration of siding with powerful predatory lenders over student loan borrowers. Seth Frotman worked as student loan ombudsman under the Consumer Financial Protection Bureau director, Mick Mulvaney. He wrote that under Mulvaney’s leadership, “the Bureau has abandoned the very consumers it is tasked by Congress with protecting.” This comes as Education Secretary Betsy DeVos has proposed new rules that would cut an estimated $13 billion in federal student loan relief for people defrauded by for-profit colleges.

Books, Not Magazines: Outcry Grows over DeVos Plan to Divert Federal Funds For Guns in Schools
Pressure is growing for Education Secretary Betsy DeVos to reject plans to grant federal funds to states to purchase firearms for teachers and school employees. The proposal comes after requests from Oklahoma, Texas and other states to train and arm school marshals. DeVos’s plan would use federal Student Support and Academic Enrichment grants to pay for firearms and to train educators in their use, and would reverse long-standing federal policy prohibiting federal funds for arming educators.

Puerto Rico Raises Official Death Toll to Nearly 3,000 as First Anniv. of Hurricane Maria Approaches
Puerto Rico officially raised the death toll from Hurricane Maria last year from 64 to nearly 3,000 following the release of a study ordered by the governor of the island. This officially makes Maria one of the deadliest storms in U.S. history. Democracy Now! co-host Juan González and Randi Weingarten, president of the American Federation of Teachers, comment.

Meet Crystal Mason, the Black Texas Mother Facing 5+ Years in Prison for Voting in the 2016 Election
A Texas woman has been sentenced to five years in prison for illegally voting, and could now have even more time added to her sentence. Crystal Mason cast a provisional ballot in the 2016 presidential election despite having a past felony conviction for tax fraud that prevented her from voting. In March, she was convicted of illegal voting; she says she did not know that she was barred from casting a ballot in Texas due to her criminal record. Her supporters argue her conviction was racially biased, and point to the case of Terri Lynn Rote, a white woman in Iowa who was convicted of the same crime after she tried to vote for President Trump—twice. Rote was sentenced to two years’ probation and fined $750. Crystal Mason discusses her situation, along with her attorney, Kim Cole. Mason has a federal court hearing in Fort Worth, Texas, tomorrow, and if she loses the hearing, she will be heading to prison. Marc Mauer is executive director of The Sentencing Project, about how policies restricting the voting rights of convicted felons disenfranchise more than 6 million people.