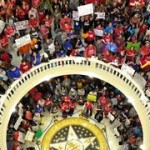 Schools across Oklahoma are closed today for a third day as teachers continue their strike demanding more funding for education and increased pay. Oklahoma’s public education budget has been slashed more than any other state since the start of the recession in 2008.

Teachers in Revolt: Meet the Educators in Kentucky & Oklahoma Walking Out over School Funding
Schools across Oklahoma are closed today for a third day as teachers continue their strike demanding more funding for education and increased pay. Oklahoma’s public education budget has been slashed more than any other state since the start of the recession in 2008, and its teachers are among the lowest paid in the nation. Scores of teachers are planning to begin a 123-mile protest march today from Tulsa to Oklahoma City. Meanwhile, thousands of teachers continue to protest in Kentucky, demanding a reversal to a provision in a recently passed bill about sewage treatment that gutted their pension benefits. On Monday, every school in the state was closed either due to spring break or in anticipation of a massive rally in the capital of Frankfort, where teachers filled the rotunda of the Kentucky state Capitol, chanting “Fund our schools!” This year’s wave of teacher rebellions began in West Virginia, where teachers won a 5 percent pay raise after a historic strike.

MLK’s Fight Against Racism, Militarism & Capitalism: Historian Taylor Branch on King’s Final Years
It was 50 years ago today when Rev. Martin Luther King Jr. was assassinated in Memphis. He was just 39 years old. Democracy Now! recently spoke with Pulitzer Prize-winning historian Taylor Branch and writer Trey Ellis, who both worked on the new HBO documentary “King in the Wilderness,” which premiered at the Sundance Film Festival. The film recalls the last three years of King’s life, beginning after President Lyndon Johnson signed the Voting Rights Act of 1965. Despite passage of the monumental legislation, King set his eyes on new battles by launching a Poor People’s Campaign and campaigning to stop the Vietnam War. King’s decision to publicly oppose the war isolated him from many of his closest supporters.