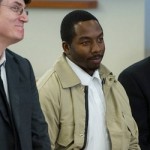 In 2013, Steven Odiase was convicted for the shooting death of 15-year-old Juan Perez in the Bronx. At the time, the only evidence against the 31-year-old Odiase were the words of a lone eyewitness, who admitted to being intoxicated at the time of the murder. Odiase was sentenced to 25 years to life in prison.

Was a Police Report Altered to Convict a Man for Murder? Inside a Woman’s Quest to Free Her Brother
In 2013, Steven Odiase was convicted for the shooting death of 15-year-old Juan Perez in the Bronx. At the time, the only evidence against the 31-year-old Odiase were the words of a lone eyewitness, who admitted to being intoxicated at the time of the murder. Odiase was sentenced to 25 years to life in prison. Then, Odiase’s younger sister, Kalimah Truesdale, set out to prove her brother’s innocence. She scoured the scene of the crime and eventually found a woman who said that she saw the shooting. Most shockingly, the woman said she had already spoken to a detective at the time of the murder and described the shooter as a man not matching Odiase’s description. However, there was no mention of the woman’s testimony in the version of the police report that was presented to Steven Odiase’s defense attorney.

Massachusetts to Throw Out 21,000 Drug Convictions After State Chemist Tampers with Evidence
In what may be the single largest dismissal of wrongful convictions in U.S. history, Massachusetts prosecutors announced Tuesday they would throw out 21,587 criminal drug cases. The cases were all prosecuted based on evidence or testimony supplied by a former state chemist who admitted to faking tests and identifying evidence as illegal narcotics without even testing it. The chemist, Annie Dookhan, pleaded guilty in 2013 to tampering with evidence during her nine years working at a state crime lab in Boston. During that time, thousands of people were convicted based on her false statements.

Meet Timothy Taylor, Convicted on Drug Evidence Handled by a State Chemist Who Falsified Tests
Among the tens of thousands of people whose lives have been affected by the massive evidence testing scandal in Massachusetts, where chemist Annie Dookhan has admitted to falsely claiming evidence was illegal narcotics before even testing it, was Timothy Taylor. He was arrested in 2009 and went on to serve five years in prison on drug trafficking charges. Annie Dookhan handled the evidence in his case.

White Nationalists, Neo-Nazis & Right-Wing Militia Members Clash with Antifa Protesters in Berkeley
In Berkeley, California, at least 20 people were arrested as fights broke out between white nationalist Trump supporters and antifascist protesters during competing rallies on Saturday. Photos show some of the Trump supporters posing with the Nazi salute. Police say at least one person was stabbed during the clashes. Several more were injured. In one instance, a known white supremacist was videotaped punching a young antifascist woman named Louise Rosealma in the face. The man who is seen punching her is Nathan Damigo, a former marine who founded the white supremacist organization known as “Identity Europa.”