Democratic Presidential candidates Hillary Clinton and Bernie Sanders are due to meet in Brooklyn, New York, on Thursday. Today’s show examines the particular question of Senator Clinton’s role in the 2009 Honduran coup. 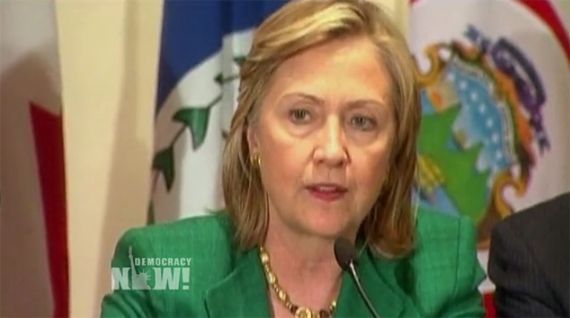 Democratic Presidential candidates Hillary Clinton and Bernie Sanders are due to meet in Brooklyn, New York, on Thursday. Today’s show examines the particular question of Senator Clinton’s role in the 2009 Honduran coup. Juan González asked her about her involvement during her meeting on April 9 with the New York Daily News editorial board. Her response was criticized by Dana Frank, an expert on human rights and U.S. policy in Honduras:

I want to make sure that the listeners understand how chilling it is that the leading presidential—a leading presidential candidate in the United States would say this was not a coup. The second thing is that she’s baldly lying when she says we never called it a coup; we didn’t, because that would mean we have to suspend the aid. Well, first of all, they repeatedly called it a coup. We can see State Department statements for months calling it a coup and confirming, yes, we call it a coup. What she refused to do was to use the phrase “military coup.” So, she split hairs, because Section 7008 of the State and Foreign Operations Appropriations Act for that year very clearly says that if it’s a coup significantly involving the military, the U.S. has to immediately suspend all aid. So she—they decided to have this interpretation that it was a coup, but not a military coup. So, she, Hillary Clinton—and Obama, for that matter, I want to make clear—in violation of U.S. law, that very clearly said if there’s a coup, they have to cut the military aid and that—all other aid to the country, she violated the law, decided, well, it wasn’t a military coup, when of course it was. It was the military that put him on the plane, which she says in her statement.

Also today, Amy Goodman spoke to Professor Robert Crews from Stanford, who recently wrote an article titled “America’s Afghan Refugee Crisis.” He suggests that the U.S. has a significant responsibility toward Afghan refugees, as: “Over the decades, the United States has not only lacked the capacity to fix Afghan society, but has played an essential role in breaking it.”

Finally, on Monday, John Kerry became the first secretary of state to visit Hiroshima. He offered no apology for the destruction of the town but advocated a nuclear weapon free world — while the Obama administration quietly updates the U.S, nuclear arsenal at a massive cost to the taxpayer.