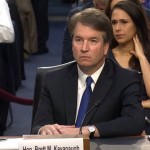 Senate Judiciary Committee Chair Chuck Grassley has announced that the committee will hold another hearing on Supreme Court nominee Brett Kavanaugh next Monday in light of accusations that he attempted to rape a 15-year-old girl at a party while he was in high school.

Intercept Report Reveals Senate Ignored Federal Court Employees Willing to Testify Against Kavanaugh
Senate Judiciary Committee Chair Chuck Grassley has announced that the committee will hold another hearing on Supreme Court nominee Brett Kavanaugh next Monday in light of accusations that he attempted to rape a 15-year-old girl at a party while he was in high school. Both Kavanaugh and his accuser, professor Christine Blasey Ford, will testify under oath. As the allegations against Kavanaugh gain steam, a new report from Ryan Grim for The Intercept has revealed that attorney Cyrus Sanai tried multiple times to reach out to Senators Charles Grassley and Dianne Feinstein on behalf of federal court employees also willing to speak out against Kavanaugh. The employees wanted to talk about Kavanaugh’s work as a clerk for disgraced former 9th Circuit Court of Appeals Chief Judge Alex Kozinski, who resigned in 2017 after being accused by at least 15 women of sexual misconduct. But Sanai never heard back. Kavanaugh has said repeatedly that he did not witness Kozinski behave in a sexually inappropriate way. Ryan Grim, Washington, D.C., is bureau chief for The Intercept. His latest piece is headlined “Attorney Sent Letter to Chuck Grassley and Dianne Feinstein Claiming Federal Court Employees Willing to Speak About Brett Kavanaugh.”

Immigrants Seeking Shelter After Hurricane Florence Fear Deportation as FEMA Shifts Funds to ICE
While the worst of Hurricane Florence is over, officials say the most dangerous flooding is yet to come for residents of the Carolinas and Virginia, as thousands have been ordered to evacuate their homes and hundreds more have sought rescue from rising floodwaters. But undocumented immigrants have expressed concern they will encounter immigration enforcement if they seek help. Meanwhile, the Trump administration has reallocated nearly $10 million from FEMA’s budget to ICE to pay for detention space and deportations. Laura Garduño García, a DACA recipient and Greensboro-based organizer with Siembra NC and the American Friends Service Committee, and Mary Small, policy director for Detention Watch Network are asked for comments.

Ten Years Since Economic Collapse Sparked Occupy Wall Street, the Cooperative Movement Is Surging
This week marks the seventh anniversary of the Occupy Wall Street movement and 10 years since the collapse of U.S. investment bank Lehman Brothers, which triggered the onset of the global financial crisis. The crisis also sparked massive global anti-capitalist movements, including Occupy Wall Street, the M-15 movement in Spain and the anti-austerity movements in Greece. “It’s striking how little we are marking these anniversaries,” says author and activist Nathan Schneider. “I think … we recognize we really haven’t done anything serious to deal with the causes of this crash.” Schneider’s new book outlines an alternative economic model based on cooperative ownership that saw a resurgence since the 2008 financial crisis. It’s titled “Everything for Everyone: The Radical Tradition That Is Shaping the Next Economy.”