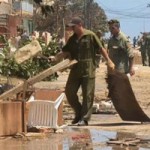 One of the Caribbean islands hardest hit by Hurricane Irma was Cuba, where 10 people died. Irma hit Cuba’s northern coast as a Category 5 storm. It was the deadliest hurricane in Cuba since 2005, when 16 people died in Hurricane Dennis. Cuba has long been viewed as a world leader in hurricane preparedness and recovery.

After Irma, a Look at Why Cubans are 15 Times Less Likely to Die from Hurricanes Than Americans
One of the Caribbean islands hardest hit by Hurricane Irma was Cuba, where 10 people died. Irma hit Cuba’s northern coast as a Category 5 storm. It was the deadliest hurricane in Cuba since 2005, when 16 people died in Hurricane Dennis. Cuba has long been viewed as a world leader in hurricane preparedness and recovery. According to the Center for International Policy, a person is 15 times as likely to be killed by a hurricane in the United States as in Cuba. Meanwhile, Cuba has already sent more than 750 health workers to Antigua, Barbuda, Saint Kitts, Nevis, Saint Lucia, the Bahamas, Dominica and Haiti.

Austerity, Divestment & Irma: Juan González on Why 300,000 in Puerto Rico are Without Power
FEMA Administrator Brock Long is traveling today to Puerto Rico and the U.S. Virgin Islands to see firsthand the damage caused by Hurricane Irma. In Puerto Rico, 300,000 remain without power—despite the fact that the island was barely hit by the storm. Authorities have warned parts of Puerto Rico could be without electricity for up to six months, in part due to the island’s economic crisis. Juan González speaks about how U.S.-imposed austerity and divestment are contributing to the electricity crisis after Irma.

A Storm of Silence: Study Finds Media Is Largely Ignoring Link Between Hurricanes and Climate Change
“A Storm of Silence.” That’s the title of a new report by the watchdog group Public Citizen that looks at the media’s failure to discuss climate change in its wall-to-wall hurricane coverage. While all the television networks commented on the magnitude of Hurricane Harvey and “extreme weather,” virtually none explained how warmer ocean temperatures lead to heavier winds, warmer air causes more precipitation, and higher sea levels exacerbate storm surges. The report examined 18 media sources’ coverage of Hurricane Harvey—looking at 10 major newspapers, three weekly news magazines and national programming from ABC, CBS, NBC, CNN and Fox News over the course of eight days’ worth of Hurricane Harvey coverage. The report concludes, “Many failed to discuss the issue [of climate change] much or failed to cover important aspects of it. … Two of the three major broadcast networks, ABC and NBC, did not mention climate change at all in the context of Hurricane Harvey.”

Special Report: How Decentralized Mutual Aid Networks Are Helping Houston Recover from Harvey
We end today’s show in Houston, Texas, two weeks after Hurricane Harvey caused historic flooding and left residents to coordinate with each other to rescue thousands of people who were left stranded when officials were overwhelmed. Now that volunteer spirit of mutual aid has continued in the storm’s aftermath. Renée Feltz reports on how many Houstonians have formed decentralized networks to clean out flooded homes, feed thousands who lost everything, and offer much-needed counseling.