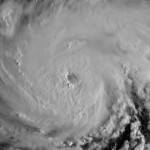 More than 1.5 million people have been ordered to evacuate the coasts of Virginia, North Carolina and South Carolina as Hurricane Florence continues to gain strength as it barrels toward the East Coast.

Climate Change Supercharges Hurricane Florence as 1.5 Million Evacuate in Carolinas & Virginia
More than 1.5 million people have been ordered to evacuate the coasts of Virginia, North Carolina and South Carolina as Hurricane Florence continues to gain strength as it barrels toward the East Coast. The enormous Category 4 storm is projected to make landfall on Thursday or Friday, bringing with it heavy rains and high winds that could linger for days after hitting land. People up and down the coast are preparing for extreme flooding and what the National Hurricane Center is calling a “life-threatening storm surge.” Experts are warning the damage could be catastrophic.

John Bolton Threatens International Criminal Court Judges for Probing U.S. Torture in Afghanistan
President Trump’s national security adviser John Bolton has threatened U.S. sanctions against International Criminal Court judges if they proceed with an investigation into alleged war crimes committed by U.S. troops in Afghanistan. In 2016 an ICC report accused the U.S. military of torturing at least 61 prisoners in Afghanistan during the ongoing war. The report also accused the CIA of subjecting at least 27 prisoners to torture, including rape, at CIA prison sites in Afghanistan, Poland, Romania and Lithuania. Bolton said in a speech at the Federalist Society Monday, “We will let the ICC die on its own. After all, for all intents and purposes, the ICC is already dead to us.” Jamil Dakwar is the director of the American Civil Liberties Union’s Human Rights Program.

Trump Admin Punishes PLO for Trying to Prosecute Alleged Israeli War Crimes in International Court
On Monday President Trump’s national security adviser John Bolton announced the administration will close the Palestine Liberation Organization’s office in Washington as retaliation for the Palestinians’ efforts to bring alleged Israeli military war crimes to the International Criminal Court. Palestinian diplomat Saeb Erekat called the move “an affirmation of the U.S. administration’s determination to continue its policies of blackmail and extortion and undermining the peace process and the two state solution.” Jamil Dakwar is the director of the American Civil Liberties Union’s Human Rights Program.

Trump Admin Punishes PLO for Trying to Prosecute Alleged Israeli War Crimes in International Court
Fallout from the women’s U.S. Open final Saturday, where tennis star Serena Williams lost to 20-year-old Naomi Osaka, after accusing umpire Carlos Ramos of sexism. On Monday the Women’s Tennis Association came out in support of Williams, with chief executive Steve Simon suggesting the umpire showed a different level of tolerance to Williams because she is a woman. During the final, Ramos gave Williams a code violation after he deemed a gesture made towards her by her coach to be “coaching,” which is banned during a game. Ramos then penalized Williams a point after she destroyed her racket in anger, and docked her an entire game after she subsequently called the umpire a “liar” and a “thief” for stealing her point. Amira Rose Davis is the assistant professor of history and women’s, gender and sexuality studies at Penn State University and co-host of the sports podcast, “Burn It All Down.”