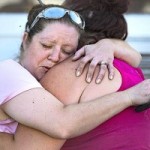 26-year-old Devin Patrick Kelley, who allegedly killed 26 people Sunday as they attended church in Sutherland Springs, Texas, was court-martialed on charges he repeatedly hit his wife and attacked his stepson. But officials failed to report his crimes to a federal database, so Kelley had no problem buying the gun he used Sunday.

How Domestic Violence and Militarism “Open the Floodgates” to Mass Shootings Like the Texas Massacre
The 26-year-old white man named Devin Patrick Kelley who allegedly killed 26 people Sunday as they attended church in Sutherland Springs, Texas, had a history of domestic violence. He was court-martialed on charges he repeatedly hit his wife and attacked his stepson. But after he was kicked out of the Air Force with a bad conduct discharge, officials failed to report his crimes to a federal database, so Kelley had no problem buying the gun he used Sunday.

As NYPD Officers Are Charged with Rape of Teenager, Advocates Call for End to Mass Sexual Violence
In New York City, two police officers have quit the New York Police Department after they were charged with rape, kidnapping and official misconduct. Prosecutors say former NYPD detectives Edward Martins and Richard Hall arrested an 18-year-old woman after stopping her car and finding a small amount of marijuana and a few anti-anxiety pills in her purse. Testing shows the DNA of both officers was found on the teenager. The former police officers are claiming the acts were consensual as their defense. “Violence is learned,” responds Mariame Kaba, an organizer and educator who works on anti-domestic violence programs. “Of course people exposed to violence all the time will use it.”

Acclaimed Chilean Writer Isabel Allende on Death of Pablo Neruda, the 1973 Chilean Coup & Trump
Acclaimed novelist Isabel Allende, an award-winning author, has written 23 books, including “The House of the Spirits,” “Paula” and “Daughter of Fortune.” Her latest novel, “In the Midst of Winter,” is a love story that explores the plight of immigrants and refugees. Her books have been translated into 35 languages, sold over 57 million copies around the world. Her father’s first cousin was Salvador Allende, Chile’s president from 1970 until September 11, 1973, when Augusto Pinochet seized power in a CIA-backed military coup. Salvador Allende died in the palace that day. Isabel Allende would later flee from her native Chile to Venezuela.