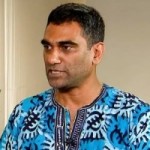 As the U.N. climate summit gets underway in Bonn, Germany, African negotiators, activists and youth are particularly vocal about the need for urgent action to mitigate the most devastating effects of global warming. Africa is expected to suffer more from this than any other continent.

“Climate Apartheid”: South African Climate Activist Kumi Naidoo Slams Inequality at U.N. Summit
As the U.N. climate summit gets underway in Bonn, Germany, African negotiators, activists and youth are particularly vocal about the need for urgent action to mitigate the most devastating effects of global warming. Africa is expected to suffer more from climate change than any other continent. This summer, flooding and mudslides in Sierra Leone killed more than 1,000 people, while extreme drought has left millions of people at risk of famine in Kenya, Somalia and Ethiopia. Kumi Naidoo is a longtime South African anti-apartheid activist and former head of Greenpeace International. He is the chair of a new organization called Africans Rising for Justice, Peace and Dignity.

Special Report: Revolt at Trump’s Pro-Coal, Pro-Nuclear & Pro-Gas Panel Rocks U.N. Climate Summit
Democracy Now! was there when activists and Democratic lawmakers at the U.N. climate summit in Bonn, Germany, staged a full-fledged revolt Monday when the Trump administration made its official debut at this year’s conference with a forum pushing coal, gas and nuclear power. The presentation was entitled “The Role of Cleaner and More Efficient Fossil Fuels and Nuclear Power in Climate Mitigation.” The panel was the only official appearance by the U.S. delegation during this year’s U.N. climate summit. Of the four corporate representatives pushing nuclear, gas and coal, Lenka Kollar of NuScale Power and Amos Hochstein of Tellurian told Amy Goodman that they disagreed with Trump’s decision to pull the U.S. out of the climate agreement.

1st Female President of the Marshall Islands & Her Poet Daughter: We Need Climate & Nuclear Justice
This year’s U.N. climate summit is known as the first “Islands COP,” with Fiji presiding over the event, but hosting it in Bonn, Germany, because of the logistical challenges of hosting 25,000 people in Fiji at the start of the South Pacific cyclone season. Today is also Gender Day here at the U.N. Climate Change Conference.