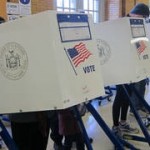 A bipartisan group of secretaries of state is condemning a proposal to allow armed Secret Service agents at election polling stations, which has already been approved by the House. On Friday, the 19 secretaries of state wrote a letter to Senate leaders urging them to drop the proposal.

“Unprecedented & Shocking”: Armed Secret Service Agents Should Not Be Allowed at Polling Sites
A bipartisan group of secretaries of state are condemning a proposal to allow armed Secret Service agents at election polling stations. The proposal has already been approved by the House as part of the Homeland Security Department reauthorization bill. On Friday, 19 secretaries of state wrote a letter to Senate leaders urging them to drop the proposal, calling it “unprecedented and shocking.”

Charterize, Privatize, Christianize: The DeVos-Backed Policies That “Gutted” Michigan Public Schools
Education Secretary Betsy DeVos is facing new criticism after she struggled in a recent “60 Minutes” interview to explain why schools in her home state of Michigan are faring poorly under the policies she has championed. DeVos is a billionaire Republican activist and the sister of Blackwater founder Erik Prince. She once served as chair of the American Federation for Children in Michigan, where she promoted school choice and worked to expand the state’s use of private charter schools. Many educators say the results of DeVos’s policies in Michigan have been disastrous.

Critics of Bayou Bridge Pipeline in Louisiana Decry State & Company Surveillance of Protesters
In Louisiana, newly disclosed documents reveal a state intelligence agency regularly spied on activists opposing construction of the Bayou Bridge pipeline, which would carry nearly a half-million barrels of oil per day across Louisiana’s wetlands. The documents show the Louisiana Governor’s Office of Homeland Security and Emergency Preparedness regularly drafted intelligence memos on anti-pipeline activists, including a gathering of indigenous-led water protectors who’ve set up a protest encampment along the pipeline’s route. Other newly revealed documents show close coordination between Louisiana regulators and the company building the pipeline, Energy Transfer Partners. This comes just one week after a U.S. district judge in Baton Rouge ordered a temporary injunction against construction of the Bayou Bridge pipeline in order to “prevent further irreparable harm” to the region’s delicate ecosystems, while court challenges proceed.