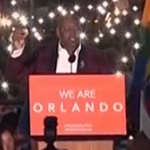 The FBI investigation into the Orlando shooting massacre that left 49 people dead at a gay club has taken an unexpected twist after evidence emerged the gunman was a regular patron of the Pulse nightclub. The FBI has begun investigating multiple claims that the shooter, Omar Mateen, might have been gay himself and regularly frequented Pulse. 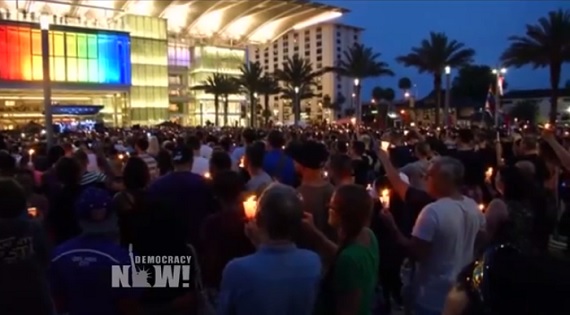 A vigil for the victims of the shooting. Image: video still

In the wake of the deadliest attack on the LGBT community in U.S. history, Amy Goodman speaks to Stuart Milk, the nephew of gay rights pioneer Harvey Milk, one of the first openly gay politicians in the United States. Harvey Milk was assassinated in 1978, a year after winning election to the San Francisco Board of Supervisors. He was gunned down along with San Francisco Mayor George Moscone by a former city supervisor. Stuart Milk is the co-founder and president of the Harvey Milk Foundation.

On Monday night, thousands gathered in downtown Orlando for a candlelight vigil to remember the victims of the massacre at the Pulse nightclub. A nearby church bell tolled 49 times—once for each victim. Most of the victims were young and Latinx.

Isa Noyola, director of programs for the Transgender Law Center, the largest transgender organization, was interviewed on today’s show. She’s a translatina activist and a national leader in the LGBT immigrant rights movement.

In a new article for Rolling Stone, journalist Soraya Chemaly writes, “The Washington Post reported Monday that ‘although family members said [Omar] Mateen had expressed anger about homosexuality, the shooter had no record of previous hate crimes.’ But that depends on how you categorize domestic violence.”

Mateen’s ex-wife, Sitora Yusufiy, has come forward to describe how Mateen beat her and held her hostage. ThinkProgress reports that between 2009 and 2012, 40 percent of mass shootings started with a shooter targeting his girlfriend, wife or ex-wife.

Just this month in California, a UCLA doctoral student gunned down his professor, prompting a lockdown on campus. But first, Mainak Sarkar allegedly killed his estranged wife in Minnesota, climbing through a window to kill her in her home. Last year alone, nearly a third of mass shooting deaths were related in some way to domestic violence.