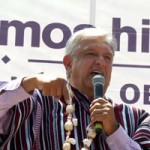 In a landslide, voters have elected Andrés Manuel López Obrador to be Mexico’s next president. The former mayor of Mexico City—who is known as AMLO—will become Mexico’s first leftist president in decades.

Mexico’s Leftist President-elect AMLO Promises Sweeping Changes on Corruption, Poverty, Drug War
In a landslide, voters have elected Andrés Manuel López Obrador to be Mexico’s next president. The former mayor of Mexico City—who is known as AMLO—will become Mexico’s first leftist president in decades. On Monday, López Obrador and President Donald Trump discussed immigration and trade in a phone call. Trump called on Mexico’s president-elect to collaborate on border security and NAFTA, telling reporters, “I think he’s going to try and help us with the border. We have unbelievably bad border laws, immigration laws, the weakest in the world, laughed at by everybody in the world. And Mexico has very strong immigration laws, so they can help us.” Irma Sandoval is a professor and director of the Center for the Study of Corruption at the National Autonomous University of Mexico. She is set to become comptroller general in President-elect Andrés Manuel López Obrador’s government. John Ackerman is the editor of the Mexican Law Review and a professor at the National Autonomous University of Mexico. He is also a columnist for Proceso magazine and La Jornada newspaper.

Asylum Seekers on U.S.-Mexico Border Are Waiting for Days in the Hot Sun, Told the U.S. Is “Full”
As the Trump administration accuses migrants of illegally entering the United States, Democracy Now! went to the international bridge in Brownsville, Texas, and found asylum seekers waiting for days in the hot sun after being told the United States was full. Christina Patiño Houle is director of the Rio Grande Valley Equal Voice Network. Juanita Valdez-Cox is a longtime farmworker organizer and executive director of La Unión del Pueblo Entero (LUPE), about the separation of families at the border, and attempt to interview an official at Case Padre, the Southwest Key detention center housed in a former Walmart.

Airport Worker “Heartbroken” Witnessing Waves of Migrant Children Silently Flown Around the Country
While reporting from the U.S.-Mexico border, Democracy Now! saw firsthand how migrant children separated from their parents are being sent around the country. An airport worker described children being brought in early in the morning in order to be flown out to other states, and raised concerns about how they are being treated. “The oldest I have seen is 10 or 11 years old. … The youngest is maybe 5,” he says. “They are sitting there silently…I feel kind of heartbroken. They are very, very young kids.”