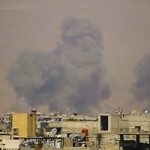 Tensions across northern Syria are escalating sharply amid a series of clashes between external and internal powers, including Israel, Iran, Turkey, Russia and the Syrian government. On Saturday, Israel shot down what it says was an Iranian drone that had entered Israel’s airspace.

“It’s Hard to Believe, But Syria’s War Is Getting Worse”: World Powers Clash as Civilian Deaths Soar
Tensions across northern Syria are escalating sharply amid a series of clashes between external and internal powers, including Israel, Iran, Turkey, Russia and the Syrian government. On Saturday, Israel shot down what it says was an Iranian drone that had entered Israel’s airspace after being launched in Syria. Israel then mounted an attack on an Iranian command center in Syria, from where the drone was launched. One of the Israeli F-16 military jets was then downed by a Syrian government anti-aircraft missile. Meanwhile, also in northern Syria on Saturday, a Turkish Army helicopter was shot down by U.S.-backed Syrian Kurdish YPG fighters near the Syrian Kurdish city of Afrin, where Turkey has launched a bombing and ground offensive. All this comes as the United Nations is warning of soaring levels of civilian casualties in Syria.

As Deadly Flu Sweeps Country, Koch-Backed Group Fights Paid Sick Leave Policies Nationwide
This week marks 25 years since Bill Clinton signed the Family and Medical Leave Act, which gave employees in the U.S. the right to unpaid time off to care for themselves and family members. A decade later, San Francisco became the first city to approve paid sick leave. Today some 14 million workers in 32 municipalities and nine states have paid sick leave policies. On Thursday, Austin city councilmembers will vote on an ordinance that would make it the first city in the South to require paid sick leave from private employers. But the measure is facing strong opposition from a Koch brothers-backed lobbying group called the National Federation of Independent Business, which is fighting paid sick leave policies across the country. This the same lobbying group that led the opposition to the Affordable Care Act.