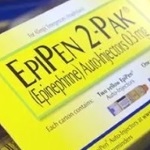 The pharmaceutical giant Mylan has announced it will launch a cheaper generic version of its life-saving allergy shot EpiPen amid public outcry over its alleged price gouging. However, consumer advocates say the cost of the generic drug is still prohibitively expensive and triple the price of what EpiPen cost in 2007 when Mylan acquired the product. The company increased the price of its allergy injector by some 400 percent in less than a decade. 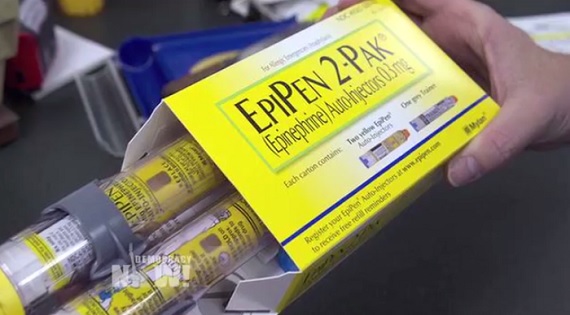 The pharmaceutical giant Mylan has announced it will launch a cheaper generic version of its life-saving allergy shot EpiPen amid public outcry over its alleged price gouging. However, consumer advocates say the cost of the generic drug is still prohibitively expensive and triple the price of what EpiPen cost in 2007 when Mylan acquired the product. The company increased the price of its allergy injector by some 400 percent in less than a decade, sparking a national conversation about the monopoly power of pharmaceutical companies.

Across the United States, millions of children and adults rely on the pocket-sized EpiPen to counteract fatal allergic reactions from common occurrences such bee stings and peanut consumption. For more, Amy Goodman spoke with Ashley Alteman, who runs a website called SmashleyAshley.com, where she has just posted an open letter to Mylan CEO Heather Bresch.

In 2007, the wholesale price of the EpiPen in the U.S. was $57. Less than a decade later, the life-saving drug now costs over $300. Each EpiPen reportedly contains only $1 worth of medicine. Mylan has a near monopoly in the U.S., and the company has seen its profits from the EpiPen alone skyrocket to $1 billion a year. Meanwhile, Mylan CEO Heather Bresch’s total compensation has spiked from around $2.5 million in 2007 to almost $19 million today. In response to the price hikes, the consumer advocacy group Public Citizen and its allies will deliver a petition signed by approximately 600,000 people to Mylan’s headquarters in Canonsburg, Pennsylvania, today demanding further price cuts. Peter Maybarduk, director of the Global Access to Medicines Program at Public Citizen, had this to say:

Mylan wants to talk about coupons and patient assistance programs and this new, absolutely bizarre move of introducing a generic version of its essentially generic own product. … The one thing it won’t do, the one thing Mylan refuses to do, is have plain talk about price and just reduce the price. That would be the simplest, most effective thing to do to ensure that everyone who needs an EpiPen can get one and that the cost burden that we all share, paying into our healthcare system, is reduced.

California lawmakers voted Monday to pass a law requiring prison time for those convicted of sexually assaulting an unconscious victim. This comes after news that California Judge Aaron Persky will no longer hear criminal cases, following outrage over lenient sentences he handed down to sex offenders. Persky became the subject of a recall campaign after he sentenced Stanford University swimmer Brock Turner to a six-month prison term for sexually assaulting an unconscious woman behind a dumpster. Judge Persky said he was concerned a longer prison sentence would have a “severe impact” on Turner. Turner is white, and Judge Persky has since given a harsher sentence to a Latino man who committed a similar crime.

Turner is set to be released from Santa Clara jail on Friday, after serving only half of his six-month sentence. More than 1 million people have signed a petition demanding Persky be removed from the bench. But supporters of Judge Persky caution that efforts to recall a jurist based on his use of judicial discretion may have unintended consequences, leading to less care in sentencing and a negative impact on people of color. Today’s show hosts a debate. Michele Landis Dauber is a Stanford law professor who is leading the recall campaign against Aaron Persky. Sajid Khan is a public defender in San Jose, California, who leads the effort in support of Santa Clara County Judge Aaron Persky.

Hackers based outside the United States have reportedly infiltrated two state election databases, raising fresh concerns about cybersecurity in the lead-up to the presidential elections. According to a new investigation by Yahoo News, FBI’s Cyber Division released a “flash” alert earlier this month and warned election officials across the nation to take new measures to bolster the security of their computer systems. Sources familiar with the document told Yahoo News that Arizona and Illinois were the two states compromised by the hacks. The Illinois hack reportedly caused more damage, forcing officials to shut down the voter registration system for 10 days in July after the hackers managed to download personal data on up to 200,000 state voters.