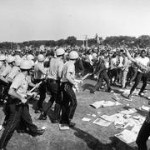 It was 50 years ago this week that the 1968 Democratic National Convention in Chicago became a national spectacle, as a major political event turned into chaos that culminated with a police riot, much of it unfolding on live national television.

50 Years Ago: Antiwar Protesters Brutally Attacked in Police Riots at 1968 Democratic Convention
It was 50 years ago this week that the 1968 Democratic National Convention in Chicago became a national spectacle, as a major political event turned into chaos that culminated with a police riot, much of it unfolding on live national television. Chicago met the protesters with 24,000 police officers, National Guardsmen and Army soldiers using tear gas and clubs.

Bound & Gagged: Black Panther Party Chair Bobby Seale Describes His Trial After 1968 DNC Protests
The 1968 Democratic National Convention in Chicago became a national spectacle 50 years ago when police attacked demonstrators,. Bobby Seale was chair of the Black Panther Party when he spoke at the demonstrations and was later arrested and became part of the Chicago 8. Seale describes how at his conspiracy trial the judge ordered that he be gagged and bound to his chair. He was sentenced to 48 months in prison for 16 acts of contempt of court, but all of the charges were later dismissed.

1968 DNC Protests, 50 Years Later: Organizers Recall Coalition Building & Running Pig for President
At the 1968 DNC protests in Chicago, Yippies Abbie Hoffman and Jerry Rubin nominated a pig named “Pigasus the Immortal” to compete with candidates Hubert Humphrey and Richard Nixon. They hoped to In-Hog-Ur-Ate Pigasus instead. His platform was to be a pile of garbage—”just like the platform of all the other parties.” They demanded Pigasus be taken to the White House for a foreign policy briefing and given a Secret Service detail. Pigasus was later arrested along with many others, who were charged with disorderly conduct, disturbing the peace and bringing a pig to Chicago. Defense attorney William Kunstler later accused the Democratic Party of the same charges.