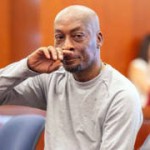 California jurors have awarded $289 million in a historic verdict against Monsanto in the case of a school groundskeeper who developed cancer after using its weed killer, Roundup. Brent Wisner was the lead trial counsel for Dewayne Lee Johnson, who has non-Hodgkin’s lymphoma.

Historic Ruling Against Monsanto Finds Company Acted with “Malice” Against Groundskeeper with Cancer
California jurors have awarded $289 million in a historic verdict against Monsanto in the case of a school groundskeeper who developed cancer after using its weed killer, Roundup. Brent Wisner was the lead trial counsel for Dewayne Lee Johnson, who has non-Hodgkin’s lymphoma. Doctors say he is unlikely to live past 2020. Johnson’s was the first lawsuit to go to trial alleging glyphosate causes cancer. Filed in 2016, it was fast-tracked for trial due to the severity of his illness.

How Monsanto Plants Stories, Suppresses Science & Silences Dissent to Sell a Cancer-Linked Chemical
As Monsanto comes under scrutiny for allegedly hiding the dangers of its weed killer, Roundup, we talk to a reporter who says the company attempted to censor and discredit her when she published stories on their product that contradicted their business interests. Carey Gillam is a veteran investigative journalist and author of “Whitewash–The Story of a Weed Killer, Cancer and the Corruption of Science.”

40 Yemeni Children Dead by U.S.-Made Bomb? Outrage Mounts Over U.S. Role in Airstrike on School Bus
Thousands of mourners gathered in Yemen’s northern city of Saada Monday for the funerals of 51 people, including 40 children, who were killed in a U.S.-backed Saudi-led coalition airstrike on a school bus last week. The massacre of school boys between the ages of 6 and 11 was one of the worst attacks on children in the history of Yemen’s brutal war. Images posted online suggest a U.S.-built Mark 82 bomb was used in the bombing. Shireen Al-Adeimi is a Yemeni scholar and activist and an Assistant Professor at Michigan State University. Her latest piece for In These Times is titled “Fine Print in Defense Bill Acknowledges U.S.-Backed War in Yemen Will Go On Indefinitely.”

AP Investigation: Behind the Scenes in Yemen, U.S.-Backed Saudi Coalition Is Working with al-Qaeda
The U.S.-backed Saudi-led coalition in Yemen has repeatedly cut secret deals with al-Qaeda, even paying its fighters to retreat from towns or join the coalition, a bombshell Associated Press investigation has revealed. The AP probe accuses the United States of being aligned with al-Qaeda in the fight against Yemen’s Houthi rebels, despite claiming to be fighting the extremist group in the region. One senior tribal leader told the AP, “Al-Qaeda wasn’t defeated. It didn’t fight in the first place.” Maggie Michael is one of the three reporters for the Associated Press who broke the story, headlined “U.S. Allies Spin Deals with al-Qaida in War on Rebels.”