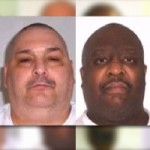 The Guardian’s chief reporter Ed Pilkington talks about the shocking double execution Arkansas carried out Monday night, marking the first time in nearly 17 years that any state has killed two people on the same day. The executions came after legal challenges reached the U.S. Supreme Court, which rejected a stay for Williams.

Witnesses to Double Execution in Arkansas Say Inmates May Have Suffered Botched, Painful Death
The Guardian’s chief reporter Ed Pilkington talks about the shocking double execution Arkansas carried out Monday night, marking the first time in nearly 17 years that any state has killed two people on the same day. At 7:20 p.m. local time, 52-year-old Jack Harold Jones was pronounced dead in the death chamber at the Cummins Unit state prison. Infirmary workers had spent more than 45 minutes unsuccessfully trying to put a central line into his neck. According to a court filing, during Jones’s execution, he was “moving his lips and gulping for air,” which suggests he continued to be conscious during the lethal injection. Lawyers for the second man, Marcel Williams, filed a last-minute appeal for a stay of execution following Jones’s killing, arguing Williams could also experience a botched, painful death. A district court judge initially granted a temporary stay of Williams’s execution but then allowed the execution to go forward. Williams was pronounced dead at 10:33 p.m. The executions came after legal challenges reached the U.S. Supreme Court, which rejected a stay for Williams. The only justice to dissent in this ruling was Justice Sonia Sotomayor. The last double execution carried out in the United States was in 2000 in Texas.

Cornel West & Former Sanders Staffer on Movement to Draft Bernie for a New “People’s Party” in U.S.
As Donald Trump approaches his 100th day as president on Saturday, his approval ratings are the lowest any president has had at this stage in generations. A recent poll by NBC News and The Wall Street Journal found just 40 percent of Americans approve of his job performance so far. Trump took to Twitter to call the poll “totally wrong.” This comes as former presidential candidate Senator Bernie Sanders has emerged as one the country’s most popular politicians. The Hill reports a Harvard-Harris poll shows 57 percent of registered voters view him favorably. Meanwhile, some former Sanders supporters have launched a movement to “Draft Bernie for a People’s Party,” urging him to start a new progressive party and run for president again in 2020. Guests are Nick Brana, the former outreach coordinator for the Bernie Sanders campaign, and Cornel West, professor of the practice of public philosophy at Harvard University. His new piece in The Guardian is headlined “The Democrats delivered one thing in the past 100 days: disappointment.”

BDS Leader Omar Barghouti Dedicates His Gandhi Peace Award to Palestinian Prisoners on Hunger Strike
As more than 1,000 Palestinian prisoners have entered their ninth day on a massive hunger strike inside Israeli jails, Amy Goodman and Juan Gonzalez interview Palestinian activist Omar Barghouti, who has come to the United States to receive the 2017 Gandhi Peace Award for his work as co-founder of the Boycott, Divestment and Sanctions, or BDS, movement. At the award ceremony, Barghouti dedicated the prize to Palestinians on hunger strike. He was almost prevented from attending after Israeli police arrested him, seizing his passport and forbidding him from leaving the country. An Israeli court eventually temporarily lifted the travel ban.

You may pre-order all 12 signs of INVOLUTION here, or choose your individual signs here. What we’re living through today is not written about in any book. We’re its pioneers in consciousness, and INVOLUTION will be your guide.