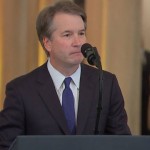 Senate Judiciary Chair Chuck Grassley has set a 10 a.m. Friday morning deadline for Dr. Christine Blasey Ford to decide whether she will testify about her allegation that Supreme Court nominee Brett Kavanaugh attempted to rape her at a high school party when she was 15 years old.

Blasey Ford Lawyers: Kavanaugh’s Background Check Must Include FBI Probe into Attempted Rape Claims
Senate Judiciary Chair Chuck Grassley has set a 10 a.m. Friday morning deadline for Dr. Christine Blasey Ford to decide whether she will testify about her allegation that Supreme Court nominee Brett Kavanaugh attempted to rape her at a high school party when she was 15 years old. But Dr. Blasey Ford’s lawyers say an FBI investigation into her claims should be conducted first. Attorney Lisa Banks issued a statement Wednesday saying, “The rush to a hearing is unnecessary, and contrary to the committee discovering the truth.” Response from journalist Sarah Posner, reporting fellow at the Investigative Fund at The Nation Institute.

Right-Wing Network Spent Millions to Portray Questions for Kavanaugh on Abortion as “Anti-Religious”
As Republicans charge forward with Brett Kavanaugh’s Supreme Court nominee hearing despite Dr. Christine Blasey Ford’s claim that he raped her as a teenager, a new Nation investigation reveals a secret network of right-wing activists has spent millions of dollars attacking questions about Kavanaugh’s stance on abortion, LGBTQ rights and executive privilege as “anti-religious bigotry.” Sarah Posner talks about her explosive new report for The Nation, “The ‘Anti-Catholic’ Playbook” is a reporting fellow at the Investigative Fund at The Nation Institute.

South Carolina: Two Women from Mental Health Facility Drown in Flood During Transport by Deputies
Two women being transported by sheriff’s deputies to a mental health facility drowned Tuesday in South Carolina when the van they were riding in was overcome by floodwaters. The two sheriff’s deputies in the vehicle survived. Forty-five-year-old Wendy Newton and 43-year-old Nicolette Green are two of at least 37 people killed by Hurricane Florence since the storm made landfall. Both women had gone to hospitals Tuesday morning when they were involuntarily committed and detained. Less than 24 hours later, they were dead. “There are a lot of questions remaining about why this had to occur, then, why there couldn’t have been some sort of an emergency delay,” says Meg Kinnard, South Carolina correspondent for the Associated Press, who has been following the story closely.

South Carolina Prisoners Were Left in Cells as Florence Descended. Why Weren’t They Evacuated?
South Carolina officials are coming under fire for refusing to relocate prisoners in mandatory evacuation zones even as Hurricane Florence barreled down on the state. Prisoners were instead put to work behind bars making sandbags to prepare for the storm’s arrival. Kymberly Smith, a community organizer with the Party for Socialism and Liberation, has been protesting South Carolina’s choice to not evacuate prisoners during Hurricane Florence.

American Prison: Shane Bauer Traces History of U.S. For-Profit Prisons from Slavery to Today
“American Prison.” That’s the name of the new book by award-winning journalist Shane Bauer, who dives deep into the profit-earning motives of U.S. prisons, from convict labor in colonial-era settlements all the way to present-day mass incarceration, including Bauer’s own stint as an undercover prison guard at the privately owned Winn Correctional Center in Louisiana.