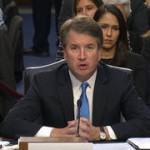 No, You Are Not Part of the Resistance: A Response to Trump Official Who Penned Anonymous NYT Op-Ed
The White House is scrambling to ferret out disloyal members of President Trump’s inner circle after The New York Times published an anonymous op-ed Wednesday it says was written by a senior administration official claiming that a “quiet resistance” is underway seeking to constrain Trump’s worst impulses. In the extraordinary op-ed, the unnamed official writes, “Many of the senior officials in his own administration are working diligently from within to frustrate parts of his agenda and his worst inclinations.”

Arundhati Roy: The U.S. Is Growing Closer to India Militarily As Modi Expands Crackdown on Dissent
Secretary of State Mike Pompeo and Defense Secretary Jim Mattis are in New Delhi today for talks aimed at deepening military and trade ties between India and the United States. India is the largest weapons importer in the world. The trip comes just a week after the Indian government conducted raids across the country targeting prominent human rights activists, lawyers, poets and critics of the the Narendra Modi government. At least five people were arrested. Critics say the arrests are part of a broader attempt by Modi’s government to silence dissidents ahead of next year’s general election. Acclaimed author and activist Arundhati Roy won the Booker Prize in 1997 for her first novel, “The God of Small Things.” Her most recent book is a novel titled “The Ministry of Utmost Happiness.”

“A Beautiful Moment”: Arundhati Roy Hails Indian Court Legalizing Gay Sex, Overturning Colonial Law
India’s Supreme Court has overturned a law criminalizing consensual gay sex, in a major victory for LGBTQI groups. The ruling voids a portion of the Indian Penal Code written by Britain’s colonial government in the 1860s, which, although rarely enforced, made sodomy a crime punishable by up to life in prison.