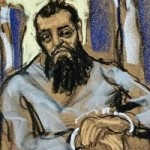 After Sayfullo Saipov reportedly drove a rented Home Depot truck down a bike path along Manhattan’s Hudson River, killing multiple people before crashing into a school bus, President Trump called for his execution and said he would consider sending him to Guantánamo Bay.

“Send Him to Gitmo”: Trump Urges Execution of Saipov After Defending “Both Sides” in Charlottesville
After Sayfullo Saipov reportedly drove a rented Home Depot truck down a bike path along Manhattan’s Hudson River, killing multiple people before crashing into a school bus, President Trump called for his execution and said he would consider sending him to Guantánamo Bay. Shayana Kadidal, senior managing attorney at the Center for Constitutional Rights, says Trump wouldn’t be talking about sending the alleged attacker to Guantánamo Bay “if [Saipov] weren’t a Muslim guy with a beard.”

Advocates: Make “Low-Tech” Car Attacks Less Deadly by Putting Barriers on Bicycle & Pedestrian Paths
In the deadliest terror attack on New York City since September 11, 2001, Sayfullo Saipov is accused of carrying out a relatively low-tech plan to kill people when he drove a rented Home Depot truck down a bicycle path, striking pedestrians and bicyclists, then crashing into a school bus. “With low-tech attacks, people throw up their hands and think, ‘What can we do if someone is using knives or driving a car into a crowd?’ The reality is, we can do a lot to make ourselves harder targets,” says Shayana Kadidal, senior managing attorney at the Center for Constitutional Rights. He outlines calls by transportation advocates to install barriers that keep cars from being able to drive onto bike and pedestrian paths.

Trump Scapegoats Immigrants, Calls to End Diversity Visa Lottery That Brought Saipov to U.S. in 2010
Sayfullo Saipov, the suspect in the New York City attack that left eight people dead, is an immigrant from Uzbekistan who entered the United States in 2010 through the diversity visa lottery program. Now President Trump has called for a crackdown on immigration, telling Congress to cancel the program. Yolanda Rondon, staff attorney with the American-Arab Anti-Discrimination Committee, argues that blaming the visa program “scapegoats the vulnerable, which always happens to be immigrants under this administration.”

Trump & Media Focus on Muslims After Attack in NYC, Even as NYPD Says Islam Played No Role
Farhana Khera, the executive director of Muslim Advocates, looks at how the treatment of Muslims and how the phrase “Allahu Akbar” is used in the media after so-called “terror attacks,” like the one in New York City.

Uzbekistan Cooperated with CIA Rendition & Torture Post-9/11, As Govt. Boiled Dissidents Alive
Sayfullo Saipov, the alleged assailant in the Tuesday attack that killed at least eight people in New York City, is an immigrant from Uzbekistan, a country that is now the focus of much attention, with some in the media calling it a hotbed of Islamist terror.