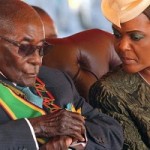 In Zimbabwe, longtime leader Robert Mugabe remains under house arrest and is reportedly refusing to resign as president after the country’s military seized Parliament, courts, government offices and the main airport in the capital, Harare. Mugabe has held power since Zimbabwe declared independence from the U.K. 37 years ago.

Zimbabwe in Limbo As Military Seizes Control & Places President Mugabe Under House Arrest
In Zimbabwe, longtime leader Robert Mugabe remains under house arrest and is reportedly refusing to resign as president after the country’s military seized Parliament, courts, government offices and the main airport in the capital, Harare. Mugabe has held power since Zimbabwe declared independence from the United Kingdom 37 years ago.

African Activist Slams Trump for Reversing Ban on Elephant Trophies from Hunts in Zimbabwe & Zambia
The Trump administration will allow American trophy hunters to import the bodies of elephants they kill in Zimbabwe and Zambia, reversing a ban put in place by President Obama. The Interior Department’s rule change comes even though African elephants are listed as threatened under the Endangered Species Act. The policy could affect President Trump’s two adult sons, Eric and Donald Jr., who are longtime trophy hunters who have repeatedly posed for photos with dead animals they killed in Africa. A 2012 picture of Donald Trump Jr. in Zimbabwe shows him standing in front of the corpse of an African elephant, holding a knife in one hand and a severed tail in the other.

Nigerian Environmental Activist: Displacement from Climate Change Contributed to Rise of Boko Haram
Nigerian environmental activist Nnimmo Bassey speaks about global warming in Africa; the role of climate change in displacing farmers and ranchers, who, in some cases, join the ranks of Boko Haram; and his response to the Trump administration’s reversal of an Obama-era rule allowing American hunters to import the bodies of elephants they kill in Zimbabwe and Zambia, even though African elephants are listed as threatened on the Endangered Species Act. Eric and Donald Trump Jr. were longtime trophy hunters who have repeatedly posed for photos with dead animals in Africa.

Activists at COP23 Decry Companies & Corporate Sponsors Pushing Fossil Fuel as Energy Solution
While representatives from nearly 200 nations have gathered here in Bonn, Germany, they’re not the only ones flocking to the city for this year’s U.N. climate summit. A number of fossil fuel companies and corporate sponsors have also descended on Bonn, where they are pushing their own agenda behind the scenes. On Tuesday, activists disrupted a presentation at an annual corporate conference held alongside the climate summit here in Bonn. They were protesting the European Investment Bank for funding the construction of the Trans Adriatic gas pipeline, known as TAP. This comes as a new report by the Corporate Europe Observatory reveals how the gas industry spent more than 100 million euros and deployed over 1,000 lobbyists to push gas as an energy solution to lawmakers in Brussels and across the European Union in 2016.

Migration Expert Urges Immediate Action as Millions Are Already Displaced by Climate Change
Researchers here at Bonn warn Pacific Islanders may be among the first to be forced to migrate due to climate change, as sea level rise threatens to make whole islands uninhabitable. But island nations are not the only places where climate change is threatening to force people from their homes. Last year, around the world, at least 23 million people were displaced by extreme weather. “If we act now in terms of climate change action,…it means we support for people to stay in their homes… Let’s not make migration a last resort, a tragedy,” says Dina Ionesco, the head of migration, environment and climate change at the International Organization for Migration.