Cherelle Baldwin, a 23-year-old survivor of domestic violence, was faced with years in prison after the death of her abuser, Jeffrey Brown. UPDATE: Great news — Cherelle is free! 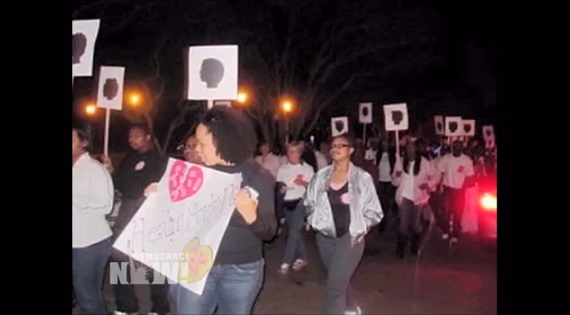 Cherelle Baldwin, a 23-year-old survivor of domestic violence, is faced with years in prison after the death of her abuser and ex-boyfriend, Jeffrey Brown. Amy Goodman interviewed Cherelle’s mother, Cynthia Long, and Victoria Law, an author and freelance journalist.

The case has caught the attention of domestic violence organizations nationwide, who are calling for prosecutors to drop the charges against Baldwin. Many groups have cited the case as an example of how Black women are disproportionately imprisoned when they defend themselves against domestic abuse. Stacy Suh, a Bay Area activist and organizer with the domestic violence survivors advocacy group #SurvivedAndPunished tweeted a meme with Cherelle’s picture, which stated, quote, “Domestic violence exists in every community, but it is Black women who are consistently denied the right to self-defense and to survive,” she said.

The rest of the show features an interview with best-selling author Adam Hochschild, who has just written a remarkable, sweeping history of the Spanish Civil War told through several characters, including Ernest Hemingway and George Orwell. The book is called Spain in Our Hearts: Americans in the Spanish Civil War, 1936-1939. The discussion includes details on how Texaco chose to supply Franco’s fascist regime.